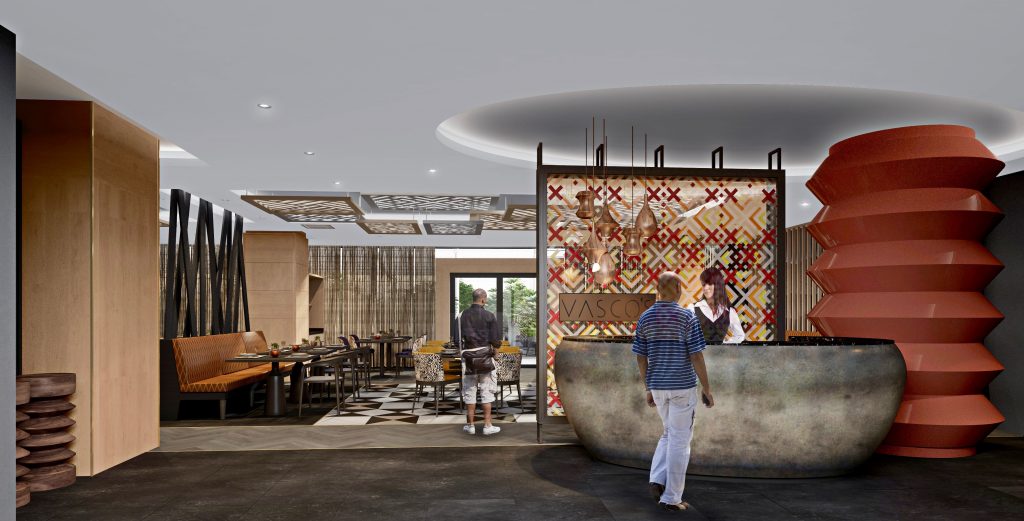 All you can eat seafood at Vasco’s Restaurant, which is prepared to your personal pleasure

Ingredients to build your own perfect salad

Portuguese explorer Vasco da Gama may have had only the briefest contact with Durban, but it was enough to inspire Vasco’s, the new restaurant at the Hilton Hotel in Durban.
According to a local tourist internet site, the explorer took one look at the dense Mangrove swamps surrounding Durban’s bay, named the bay “Terra do Natal”, (Christmas Country) and promptly left, having already established a good enough port at Maputo.
But I suppose you could say the restaurant’s food is designed to be as adventurous as the explorer himself and to celebrate the wonderful fusion of Durban’s cultures as well as the best of South African and international contemporary cooking.
Basically, Vasco’s is a buffet restaurant that includes an on-the-spot tandoori oven and a live cooking station. There’s also a limited al a carte menu.
The theme of the all-you-can-eat buffet changes nightly. On Friday, the night we were there as guests of the Hilton hotel, it was seafood. On Saturdays it’s curries while the terrace sometimes hosts braai evenings.
Most people love buffets because it’s easy eating – you can choose with your eyes – it’s a relatively cheap way to eat, you have access to many different dishes and flavours and there is no limit to how much you can eat.
I personally prefer to eat al a carte because I find the range of choice at buffets somewhat daunting and because the food sometimes hangs around a bit, curling at the edges. .

But, in Vasco’s favour, the food moved so quickly nothing hung around long enough to curl. And there’s the tandoori oven churning out food constantly, like naan bead and tandoori prawns, while the live cooking station offers fresh fish, calamari, mussels and prawns cooked to your specification (on Fridays, that is).
I started with some pickled fish (unmemorable) and salt and pepper calamari (lovely and fresh). My friend Meleney opted for the smoked salmon, which she said was great. Former Tribune colleague Buhle chose corn and mussel chowder, which I tasted and thought was pretty good. He did too.
Otherwise starter options include octopus salad, tropical coleslaw, king caprese salad, Cape-style pickled fish, seafood cocktail and a good selection of salad ingredients.
Then I tried a slice of a whole yellowtail which was excellent and some Cajun buttered corn on the cob, which was grim. Cold and chewy.
After that I headed for the prawns at the live cooking station and asked for them to be cooked in a seafood spice with lemon and garlic flavoured butter. They were divine as was the piping hot roti.
I returned to have more prawns, also trying some tandoori prawns, but preferred my version.
Other main options include Madras fish curry, seafood thermidor, mussels, wok-fried chunky vegetables, basmati rice and roasted baby potatoes. I didn’t try any of the vegetables. Who wants veggies when you can order prawns!
Meleney was particularly complimentary about the yellowtail line fish, the tandoori pawns, the hot naan bread and the coriander fritters, She also raved about the homemade per peri sauce which, she said, was mild but with loads of flavour.
Buhle loved his prawns.
Then on to desserts. I had some banana and chocolate baked pudding with custard, which was okay as was the pastry. There were also a vanilla cake, other pastries and fruit salad, but nothing looked particularly inspiring. The cheese selection was good, though.
The Hilton staffer, Ashley Smit, who was our host, offered to let us try their carrot cake (still in the kitchen), which he boasted was the best ever. It was pretty good, though the cream cheese icing was too sweet for me. No stinting of pecan nuts happily. You can try it at the little coffee shop in the reception area.
Vasco’s small al a cart menu offers some tandoori-inspired dishes, among others, like tandoori lamb, a tandoori chicken wrap and a pulled tandoori pork sandwich.
“There is a Durban influence to the restaurant, where the modern reception desk is modelled on a traditional beer pot, backed by a glass wall featuring typical Indian colours. The pillar behind the desk reflects wooden bracelets, continuing the theme that celebrates the fusion of cultures that is Durban,”  reveals their press release.
My impression is that it’s a very attractive and warm environment with a décor that complements the theme, but doesn’t impose itself.
The evening we were there it was very busy and the vibe was great while the service was, as usual, excellent.
Cost of buffet: R350 per person which is very reasonable considering what was on offer. – June 2017