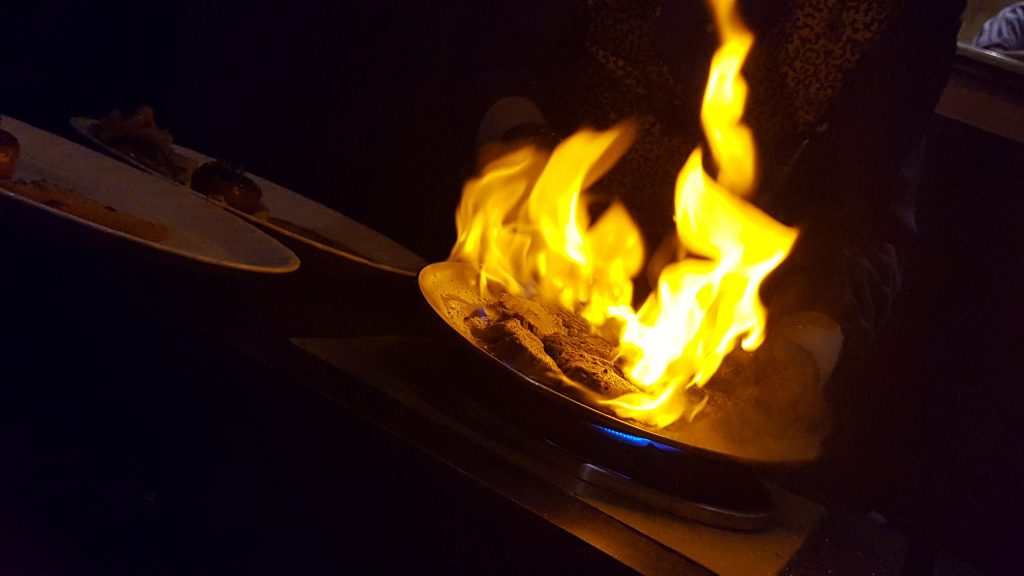 The dramatic moment our chateau briand is flamed in brandy 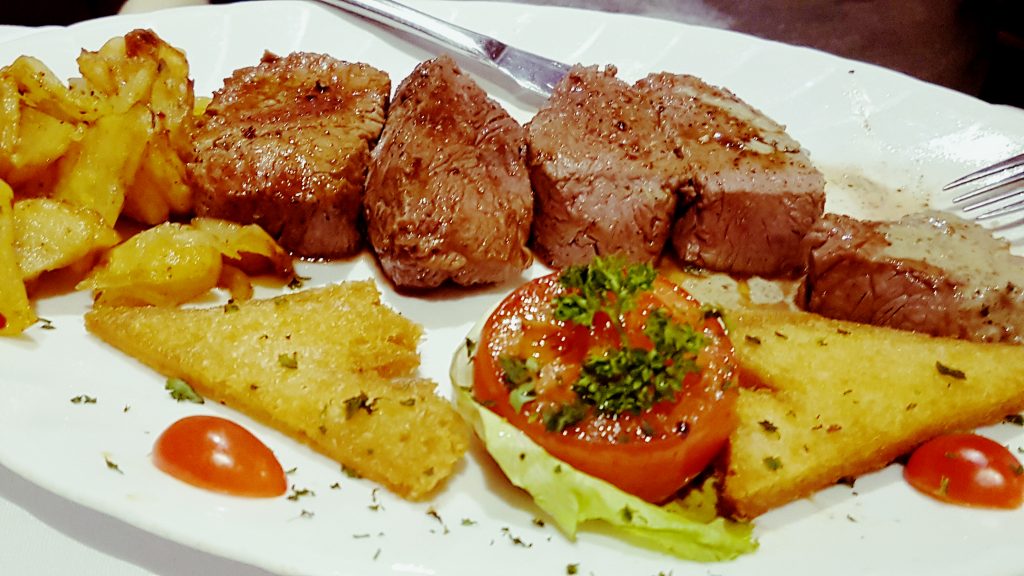 We promised food writer Frank Chemaly an adventure and pretty much ended up with a disaster. Terrible service and lacklustre food. I think the Roma Revolving should be euthanised. Frank hopes he never has to return, but he does offer (below) his version of the classic Avocado Ritz in the spirit of something good can come of something bad. Here he offers his view of our experience. Below is mine…..

FRANK CHEMALY
Was promised an adventure. We were going to dinner on Saturday night. Don’t know where, do know when. “Pick you up at 6.30” read the SMS said. Sounds like fun. And so our chariot arrived and started heading for town. Hmm. Cargo Hold? No. Buds on the Bay – no. Julios on the Bay? Big no. That’s not an adventure. That’s masochism. Royal Natal. No, that was
plan B. The Ace Butchery? We all laugh.
And so we ended up fighting for a space in the parking lot below the Roma Revolving. And doing a few revolutions of a rather large block before finding a spot.
The Roma had been going around and around for over forty years … as has the menu and much of the decor. And so it would seem have the staff… it took them that long to find our table.
We were seated and then we waited. And waited. The conversation revolved around the retro menu. Yes there’s still sole bon famme, duck a l’orange and that classic chateau briand. Meleney and I decided we had to go for this.
And then we got to the decor. Well someone had tried to tart it up. The kitchest of the bucolic Italian country scenes had made way for marble tiles, the bar was all done out in hot bordello red (sadly without the charm of the Oyster Box) and the coco de mere seed pod, talking point for generations of diners, had been pensioned off. But the Roman warriors were still there. As were those drapes.
Ah a waiter ventured into our corner of Siberia and we collared him and ordered drinks.
And then they played revolving waiter. We never quite knew who our waiter was. Each new victim seemed vaguely bemused we were even there. And that we might actually require service. Later it emerged there is one waiter for drinks and another for food, yet another for dessert and yet another for coffee. No wonder the wheel wasn’t turning.
Halfway through drinks we eventually collared a waiter to take our orders.
Little on the starter menu inspired. I inquired about the excellent pate maison that I fished out of the rusty cogs of my memory bank – only to discover it was no longer popular. To cut a long story short it had been around the block once too often. So Ingrid and Luke would share the smoked salmon, R69. and Meleney and I the avo Ritz, R74. It arrived fairly promptly, but then neither involved no cooking. The salmon was laid out flat over a bed of iceberg lettuce (who still uses iceberg lettuce?) and served with little triangles of crustless brown bread (which we had to ask for). There was not a caper or dollop of cream cheese or even a radish rose to put a bit of spin on it.
Our avo Ritz was a generous portion of two avo halves (complete with black stingy lines) and a few plain boiled prawns all smothered under a duvet of think pink mayonnaise. Uninspiring.
And then we waited and waited and waited. And that was just for the second drink. We eventually coerced a waitress who couldn’t help us, but would find someone who could. And she was in such a tailspin she dumped a whole pile of cutlery on the table and sped off.
And then we waited and waited and waited and waited and even the restaurant stopped revolving as we waited for our mains.
Ingrid’s duck was a miserable affair – a few mounds of dry breast arranged between two lines of piped mashed potato (with a dried crust) garnished with a couple of fresh orange twirls. R165. Well if they weren’t going to do it properly they could have at least put a few tablespoons of marmalade over it as a glaze. She also had to ask for vegetables, which used to be automatic, but at least these were cooked fresh. Nice in fact.
Luke’s lasagne was a horrid dish, R104. A mound of something in the bottom of a small bowl topped up with oil. Why do I suspect a microwave – surely not, they weren’t around in 1973.
On the other hand our chateau Briand was superb … and enormous, R365 for two. It could have fed the four of us and was flamed at the table with aplomb. The meat was so beautifully tender you could cut it with a teaspoon and I liked the pungent pepper sauce. Meleney seemed to like the béarnaise, although it was hardly a classic one. More like mayonnaise in my opinion that suffered from a heavy hand with the tarragon vinegar.
By now it was after ten. Dessert, even though it was from the trolley was not an option. It might have taken another rotation to wheel it around to us. I settled for an enjoyable coffee served strangely without milk, but a jug of water.
And then we waited to pay the bill. And waited. We walked to the entrance to sort it out. One waiter even said goodbye to us as if we were leaving so we could have just walked out. Eventually I pushed in front of a bunch of waiters to get to the card machine.
One new revolution to the Roma is an automatic ten percent service charge added to the bill. Apparently it does state this on the menu although none of us saw it. When I complained that the service was so abominable it wasn’t deserved, it was quickly removed from the bill.
So this is one adventure I hope doesn’t come round again soon. 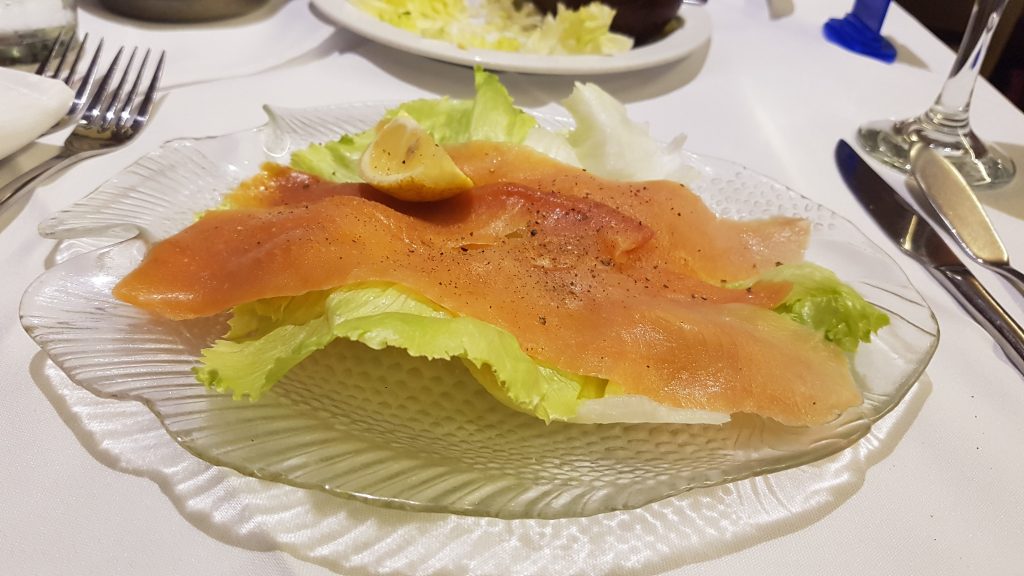 INGRID SHEVLIN
It takes a rare talent to offer your diners terrible service and lacklustre food and still pack out your restaurant.
As you realise no doubt, I’m talking about the Roma Revolving, an institution on Durban’s dining scene since the 70’s and, according to their menu, one of three remaining revolving restaurants left in the world.
I have a theory about why customers keep going to the Roma (and weekend nights are packed). And that’s because it’s a destination restaurant. You go there to celebrate an event, eat (hopefully), drink (hopefully), take in panaromaic views (thankfully) of Durban and then go home, relieved that you have done something special for your mother’s birthday.
Talking birthdays. Three were being celebrated the night we were there and we knew that because of the birthday messages tacked to the windows above their tables. Tacky. The most notable was Denise who was celebrating her 90th birthday. I felt sad she was celebrating it at the Roma, but perhaps she was just happy to get out.
As for the décor, metres and metres and metres of shiny red padded fabric that would have looked more at home in the Palace of a Thousand Pleasures. It was bad taste retro.
And the food was also retro. Stuck in the 70s. Grapefruit cocktail, Avocado Ritz, crayfish thermidor, escargots in garlic butter, chicken cordon bleu.
But there are still plenty of other options. A full selection of of traditional Italian pasta specialities, and a comprehensive choice of meat dishes from steaks and veal to chicken dishes. Then there are the chef’s specialities, which include wild rabbit casserole, ostrich fillet, veal cassrole, springbok loin and crocodile steaks. So, in it’s favour, a wide variety of options.
Frank has pretty much covered the food we ate. Rather kindly he didn’t mention presentation. Because there wasn’t any to speak of. My duck, as you know, was dismal. Recently I had duck at the Glenwod Restaurant in, yes Glenwood. It was superb. Tender and pink inside and crispy on the outside. Not difficult to do I would think.
At the end of our meal I did consider ordering the crepe suzettes. Now that is truly a dish of the 70s, but the thought of trying to collar the dessert waiter was too exhausting. You know, at first the terrible service was funny – it would make a good story to dine out on later – but not towards the end. It was just so tiresome.
Frankly, I think the Roma Revolving should be put down and handed over to a restaurateur who can produce food that does justice to the amazing view. And make Durban truly proud.
Our bill came to R1 140.48 with tip included, R1 036.80 without. This included drinks.

Pink sauce
1/2 to 1/3 jar of good quality mayonnaise (or make your own)
A good dollop (1 Tbs) of good quality tomato sauce
Splash of Worcester sauce
Splash of sherry
Squeeze of lemon juice
A few drops of tobasco
Tip of a teaspoon of hot chili sauce (don’t use sweet chilli or peri peri. If you don’t have rather add more tobasco)
Salt and pepper

Method
1) Peel and devein the prawns and dry thoroughly (I usually place them between two tea towels)
2) Fry the onions and garlic in butter and olive oil over moderate heat until soft but not coloured. Remove from the pan
3) Fry the prawns in butter in small batches over high heat until just cooked – a couple of minutes max. Make sure there is only one layer in the pan. They must fry not stew. Remove and repeat as necessary.
4) Make the sauce by mixing all the ingredients together. Taste and adjust the flavours. More sweetness, add more sherry, more savory add Worcester sauce, more oomph add pepper, tobasco or chilli, more colour add tomato sauce, more acidity, lemon juice. You could make it richer with a dash of cream. The sauce will not be the lumo pink stuff you get from a bought
1 000 island dressing.
5) Mix the prawns and onions in the mayo while they are still hot. Allow to cool
6) Slice (or dice if you’ve got to remove any funny bits) the avo just before serving, season generously and sprinkle with lemon juice
7) To serve, you could serve on individual plates, but I arrange the avo around the edges of a platter and pile the prawns into the middle. Garnish with chopped parsley and lemon wedges and a sprinkle of black pepper. Enjoy.