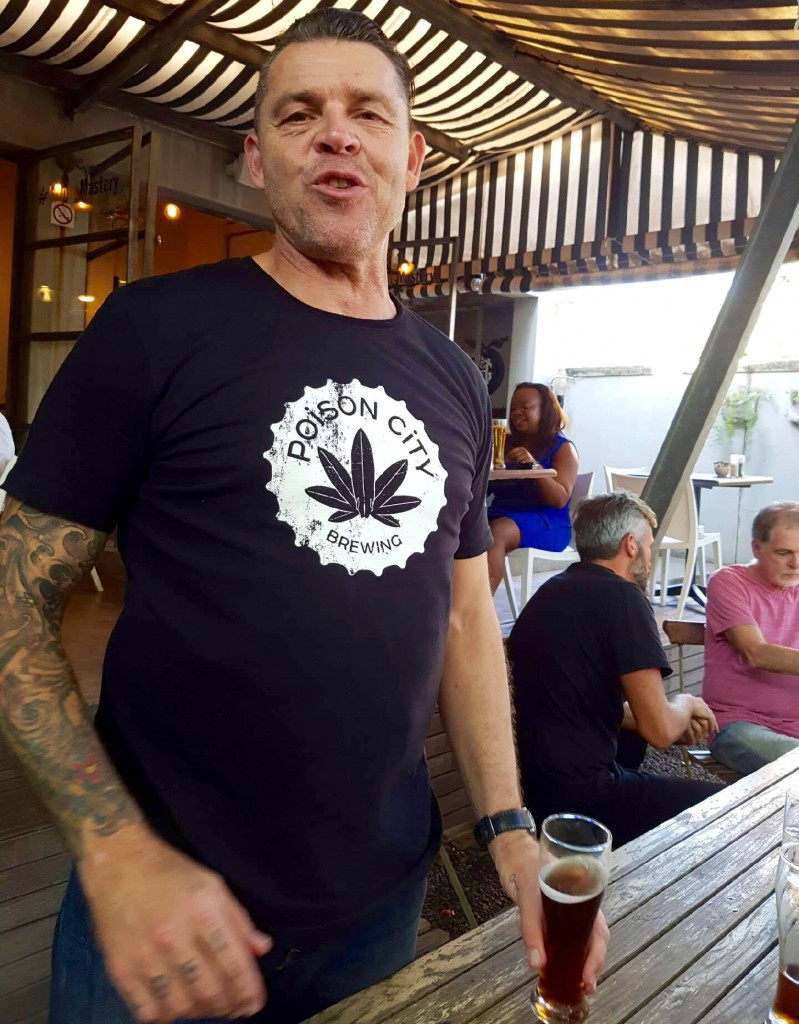 Poison City Brewing founder Andre Schubert doing what he does best … talking. Behind him is his partner, Graeme Bird and guest Mike Tarr in the pink shirt 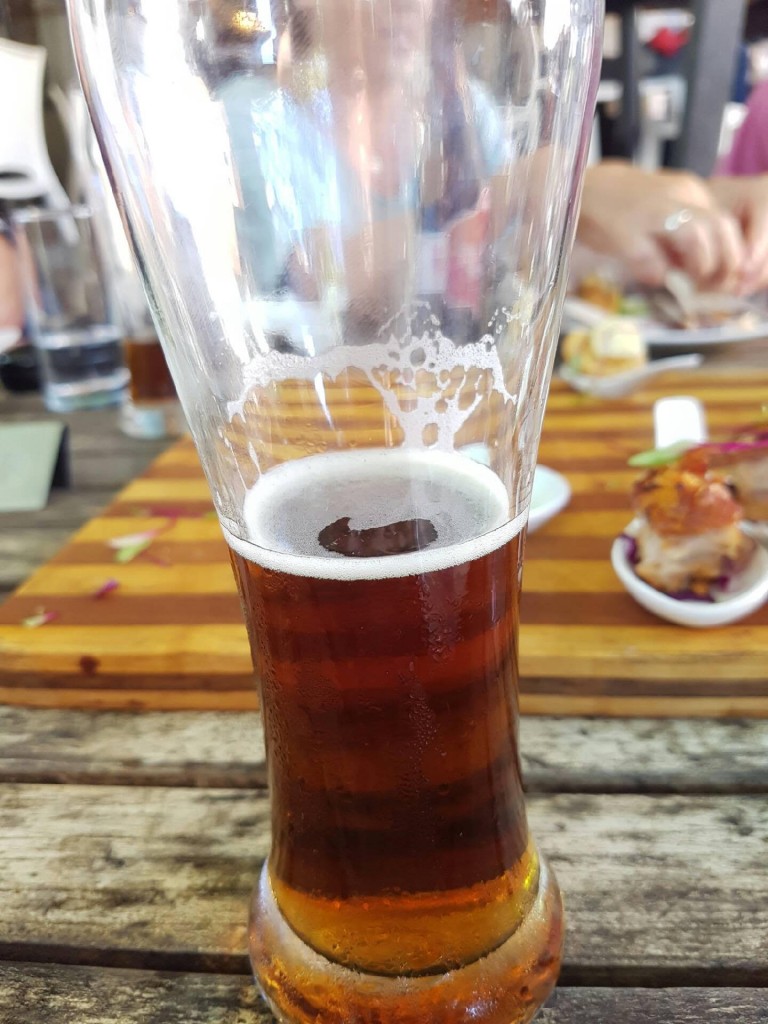 Despite it being inspired by all things British, this English pale ale, is as quintessentially Durban as Durban poison. Meleney Cunniff and Ingrid Shevlin were at the launch of this new craft beer

The day was Autumn mellow. The vibe was chilled. The music was lively. The ale was smooth with warm overtones of malt, caramel and dark chocolate. And the food was all that an ale-drinker could expect and more: Artisanal pork sausages; free range beef burgers; a vegetarian cannelloni; a bacon, avocado and cheddar sarmie; and a traditional ploughman’s lunch.
This was the launch of a pale ale quaintly named The Punk Rocker at the Market restaurant in Marriott Road. Hosting the launch were Andre Schubert and Graeme Bird, founders of Poison City Brewing, and this was their latest brew. An ode to Durban.
The two partners say they live, surf and dream Durban and, in case anyone dares to challenge their “We Love Durban” and surfer boy credentials, this is their manifesto…

” Anti-establishment, yea, we Durbanites totally get that. And while we might have kicked the bloody Poms out of our province, we’ll keep the inspiration for their ale, and their punk music legacy and make it Durban born and bred”

Yay for surf city.
Andre and Graeme waxed lyrical about their latest “baby” and what had inspired its name. The two had grown up during the punk rock era and mused over its origin and its left wing leanings, the Sex Pistols and its leader Sid Vicious (he was misunderstood, apparently) and Vivian Westwood. She’s  credited with bringing modern punk and new wave fashions into the mainstream. As for her husband, Malcolm McLaren, he managed the Sex Pistols. So, true-blooded punk rockers.
But we were there to sample and learn more about The Punk Rocker so, inevitably, the conversation turned to its conception.
Andre and Graeme have put an enormous amount of thought, energy, research and trial and error into creating and marketing their first pale ale. Their first brew was The Bird, a lager, which is now available in 51 outlets.
They chose, for instance, an old style label for Punk Rocker, which might not be “ice tub friendly”, they said, but it evoked memories of their first pint in England. And memories are all to these firm friends.
They discussed the alcohol content (4%), its colour, the carbonation which produces very fine bubbles until the last drop, why they decided to add nitrogen and not CO2, demonstrated how to pour to get a ‘head’, talked about statistics of craft beer drinking (65% of all craft beer is consumed in Joburg), and the demographics of craft beer drinkers (younger black woman, apparently).
They also explained that craft beer is meant to be sipped slowly and savoured and is not meant to replace the six pack traditionally imbibed at rugby games. They also discussed the optimum drinking temperature for Punk Rocker.
As a nod to the Durban weather Punk Rocker was served to those at the launch at 4°C , but Andre recommends drinking it at 10°C to fully enjoy its subtle flavours.
And those flavours were toasted malt, toffee caramel, grass, dark chocolate  with a floral rose petal nose. Not sure that means much to you, but know that the flavour was warm, mellow, refreshing and very appealing to even non-beer drinkers.  Which is exactly their aim. A cross-over appeal. And, interestingly, the warmer the beer, the richer the flavour. Guess Andre was right after all.
For Andre and Graeme this is project, which not only reflects their passion for brewing craft beer, but their shared coming-of-age experiences and memories,  all of which they want other craft beer drinkers to experience and enjoy as they have. Cheers! 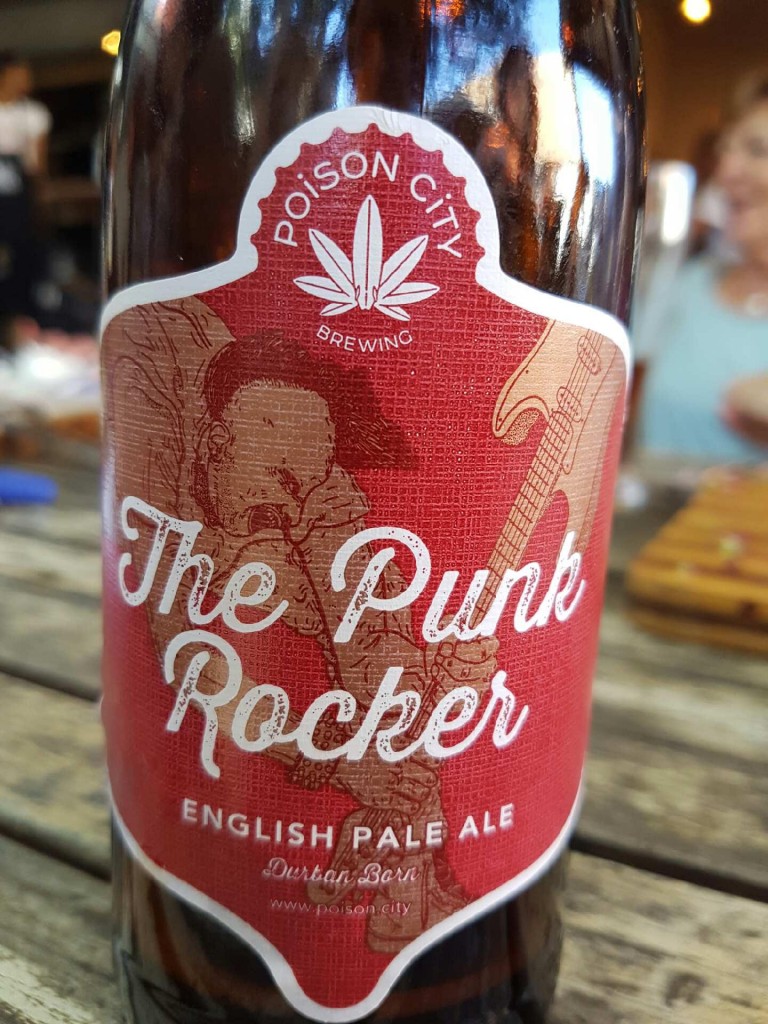 The Punk Rocker and its old-style label