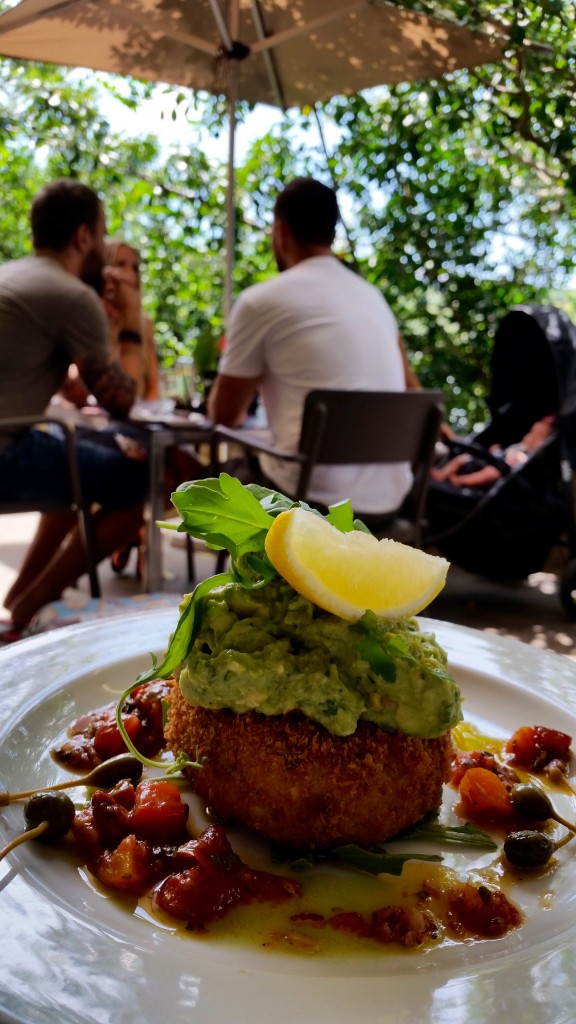 Rub shoulders with the young and beautiful set at Ray’s Kitchen where you can dress casual but eat fine food.

Ray’s Kitchen is a popular eatery located inside Dunkirk, an exclusive gated estate set in 42 acres of indigenous coastal forest in Salt Rock. But, despite being ringed by homes worth millions, each of which has been designed to fit unobtrusively into the indigenous landscape, it’s a surprisingly casual venue serving cafe-style food. It’s so casual that on the Sunday we were there, the clientele were mainly the young and beautiful (and probably rich) wearing beachwear and slipslops. One was actually topless. One of the guys that is. Nice sight, though. Perhaps it is the proximity to the beach that encourages casualness.  Or the swimming pool, as Ray’s Kitchen is part of Dunkirk’s clubhouse facilities.
Another group well represented were young couples with babies. Everywhere you looked there were babies and besotted parents. Must be something in the water, joked owner Paul Sheppard, who runs Ray’s Kitchen with chef Ray Friedman, a childhood friend. Paul is also part owner  in Marco Paulo an awesomely good eatery in Mount Edgecombe.
Happily the evenings are given over to grown-ups and, as enchanting as babies are, better they are at home at nights watched over by grannies as their parents take a break.
The restaurant’s premises have had several incarnations since it first opened as Umami, which have fared less successfully than Ray’s Kitchen which seems to have the winning touch. 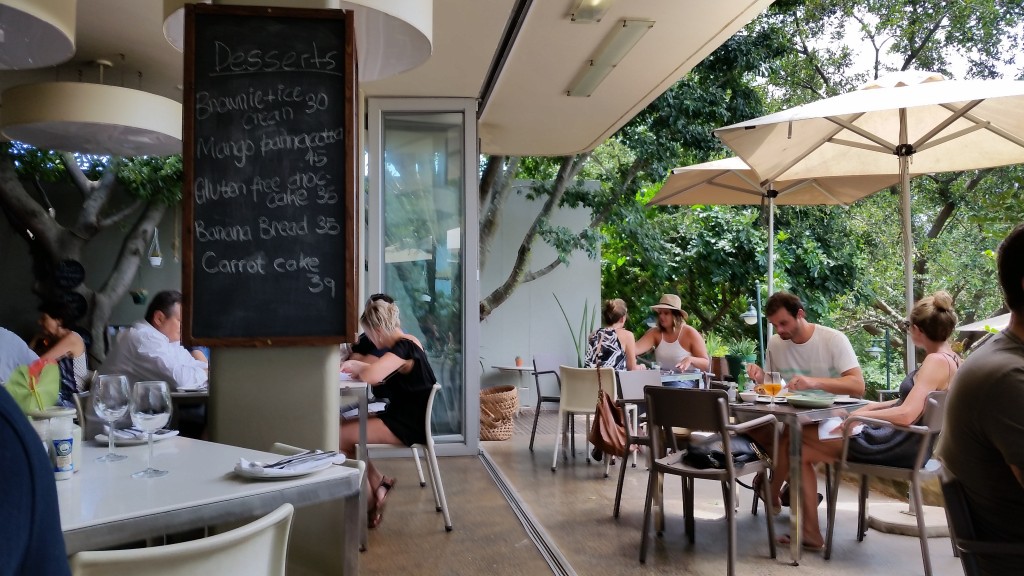 THE LOOK
An open, contemporary look with cement flooring and casual furnishing. But comfortable enough. Indigenous coastal trees and shrubbery surround the restaurant creating a corner of cool – helped by a fresh breeze.  There are two outside terraces with tables under umbrellas. And, as I said, a swimming pool. 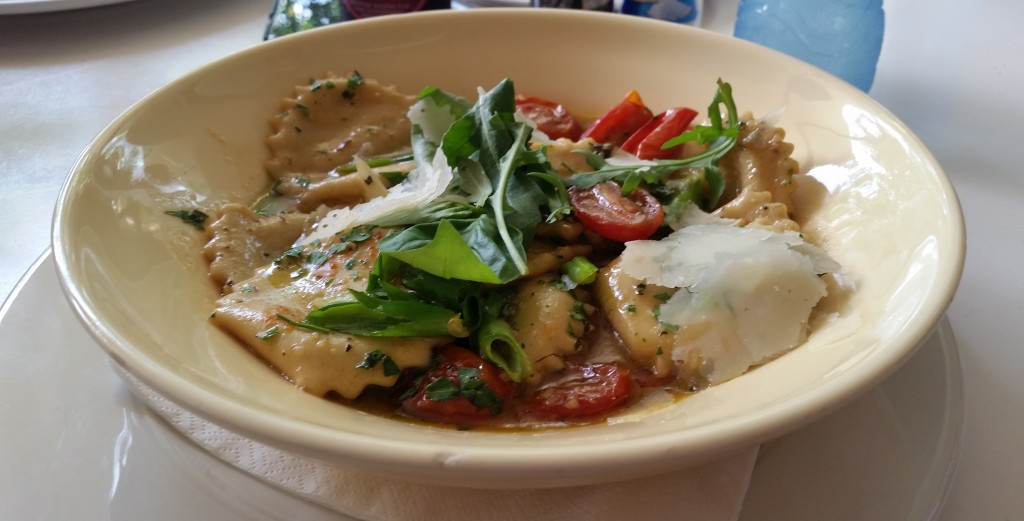 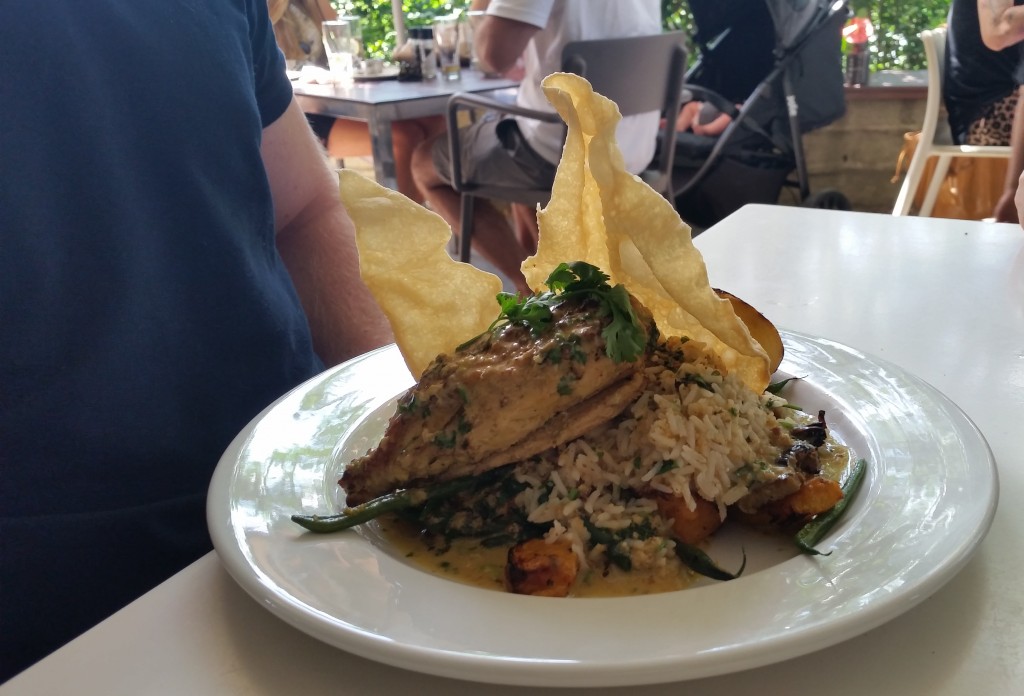 TO THE FOOD
It may be cafe but this is sophisticated cafe food, beautifully presented and prepared. A vision for the eyes. The menu is divided into such categories as starters (Caribbean crispy squid with lime, ginger and coriander mayo); pastas and risottos, (seafood tagliatelle or panfried veal served with field mushrooms and rosemary tossed with egg tagliatelle); mains, which include piri piri chicken, a beef fillet and a pork ribeye crusted with panko, sage and macadamia); burgers (beef and lamb) and sandwiches (prego roll, and a chicken coronation with pineapple, ginger chutney and toasted almonds. Prices are reasonable. Also daily specials. So, in some sense, this menu touches all bases. Paul suggested we start by sharing their fishcake. I demurred. Fishcakes have always disappointed in the past. Not ours, he said. Well, not only did our large fishcake look good, piled with well-flavoured crushed avocado, and served with caper berries, but the flavours were outstanding. Up here with the best.
The daughter opted for homemade butternut panzerotti, served with wood-roasted cherry tomatoes, garlic, spring onion and lemon butter, R89. Sublime.
The son-in-law chose the oven-roasted masala marinated chicken breast served in a light curry sauce with toasted coconut, lemon-zested rice and crispy poppadum, R95. Another superb dish with tender succulent chicken and intense flavours.
I was a little disappointed with my line fish – geelbek, R149, – served with roasted veggies as it did not share the same exciting flavours as the two other dishes. Partly my fault as I opted for chips rather then its usual side of  coconut basmati rice. That would, I think, have added more flavours.
We ended with a delicious carrot cake (served muffin-style, R39) and a silky smooth mango panna cotta served in a jar, R42. Our bill came to R561
We’ll be back.

VIBE
Very chilled. This is certainly a place where you can happily waste away a Sunday afternoon with friends. Service was good, too.

LOO REVIEW
Clean and well appointed. Toilets were being cleaned while we were there. Unusual for a Sunday, but necessary when you have a swimming pool and kids running in and out.