Aubergine with buttermilk sauce and topped with pomegranate seeds

Plenty by Yotam Ottolenghi (Ebury Press), explores the world of cooking with vegetables, grains and all things non meat ( R560 from Adams Booksellers in Musgrave). Recipe below.

I was a vegetarian once. For about ten years in fact.  Then the daughter came along and cooking became more complicated. But the point of this minor confession is that I once owned loads of vegetarian cookbooks and Plenty is unlike any I’ve come across before – thanks to Ottolenghi’s  genius with combining flavours and a childhood growing up in Israel and Palestine which exposed him to, as he explains, “a multitude of vegetables, pulses and grains that are celebrated in the region’s different cuisines”.
The result is a collection of  totally original and innovative ways with vegetables, grains and pulses that are recreated into meals which range from salads, soups, souffles, flatbread and pizza toppings to risottos, pastas, paellas and flans.
The book is divided into sections relating to vegetable types, such as root veggies, onions, mushrooms, squashes,  brassicas (broccoli et al),  aubergines, tomatoes, leaves cooked and raw, green beans, green things, cereals, pulses, pasta, polenta and couscous. A final section covers fruit and cheese.
Plenty was inspired by a weekly column Ottolenghi wrote for The Guardian’s Weekend magazine,  which was aimed at vegetarians, even though he is not one himself. He says in the forward to his book that he came under some flack for using diary products and eggs,  but refused to budge from his attitude that non-meat cooking should, in his view,  include all food groups apart from meat and seafood.
And in this way he has sensibly broadened Plenty’s appeal.
So, this is less book for vegetarians and more a book where the vegetable is the star of the meal. But don’t be fooled by the idea that anything with vegetables simply involves chucking a few items into a pot and, hey presto, you have a substantial meal.
Many of the recipes are time-consuming and some ingredients would be difficult to source. One of his simpler recipes, requires, for instance,  buffalo mozzarella to be marinated in fennel seeds, fresh basil and oregano, oil and seasoning before serving with tomato. Do you think I could find Buffalo mozzarella anywhere?  No. And, even though Woolworths proudly claims on its website it is a stockist, it has been out of stock for ages.
Moving on,  so Ottolenghi takes no shortcuts (his hummus recipe requires the overnight soaking of the chickpeas – no tins for him) and hopes you are of the same mindset.
And to titillate your tastebuds, think of these combinations. 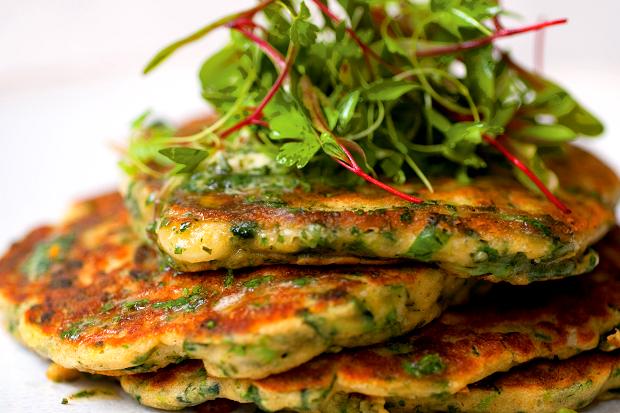 GREEN PANCAKES WITH LIME BUTTER
I tried out this recipe with great success considering I was hampered by not having my electrical whisk (borrowed but not returned) and having to whisk the egg white by hand, which is not to be recommended.
Secondly I misread the recipe and thought it was 1 teaspoon of baking powder instead of
1 tablespoon (a lot!). I did add in more after realising my mistake and after having already starting making the crumpets, but it didn’t make much of a difference. If you look at the picture above, from his book, they don’t seem to rise very high in any event. I also didn’t use self raising flour, but stoneground cake flour.
The lime butter is the star of the show and utterly delicious. Because this was a time-consuming recipe (for me anyway) I made the lime butter in advance. Happily, there was enough left over to cover the next time I make the pancakes.
I’m not sure what the point is of salt-free butter as you have to add salt anyway. Next time I will use salted butter as the dish could have done with more seasoning.
Don’t stint in the chillies. It’s an important ingredient.
I made sure to get all the moisture out the spinach by pressing between paper towels. Too much moisture will make batter soggy. Mine were a perfect texture from that point of view.
Ottolenghi suggests the pancakes are perfect for brunch. He writes:  ” Brunch is the ideal meal for them, served with a salad of seasonal leaves and possibly also a slice of freshly grilled halloumi or a piece of smoked fish.
“Some lime butter will probably be left over. Keep it in the fridge and then smear it over a baked sweet potato.”

1  First, make the lime butter. Put the butter in a medium-sized bowl and beat with a wooden spoon until it turns soft and creamy. Stir in the remaining ingredients.

2  Tip everything out on to a sheet of clingfilm and roll into a sausage shape. Twist the ends to seal, then chill until firm.

1  For the pancake batter, put the flour, baking powder, egg, butter, salt, cumin and milk in a mixing bowl, and whisk until smooth.

2  Add the onion and chilli to the batter.

3  Put the spinach in a pan with a splash of water, cook until wilted, drain, squeeze dry, then roughly chop and add to the batter.

4  Whisk the egg white to soft peaks and carefully fold it in to the batter.

5  Pour a little oil into a heavy frying pan and place on medium-high heat. For each pancake, ladle two to three tablespoons of batter into the pan and press down gently. You should get smallish pancakes, about 7cm in diameter and 1cm thick.

6  Cook for a minute on each side, until a nice golden-green colour. Transfer to a paper towel and repeat, adding oil as needed, until all the mixture is used up. Keep the cooked pancakes warm.

7  To serve, pile up three pancakes per person and place a disc of flavoured butter on top to melt. Serve a flavoursome leaf salad on the side.