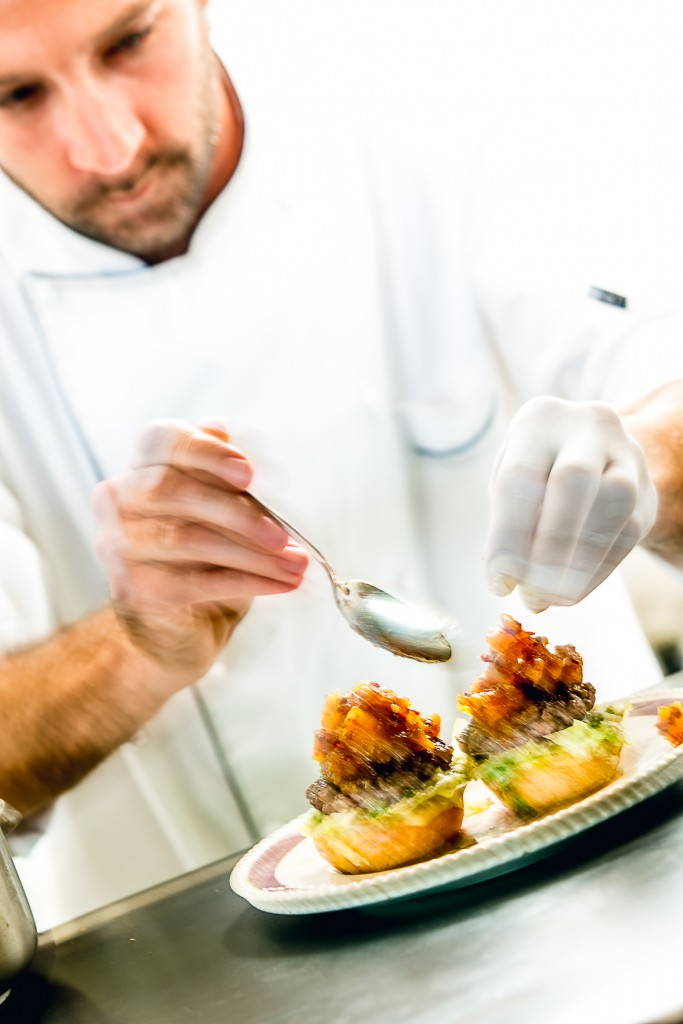 The humble burger is transformed into a magical mix of flavours at 031 Bar & Restaurant and the alchemist behind this magic is Jordan Semple. This homeboy returned to the city of his birth about a year ago after a long stint working in London restaurants. Soon after he arrived home he started serving bunnies and burgers at markets under the brand Funny Bunny.
Now he’s opened a restaurant at Distillery 031, Durban’s first artisansal spirits distillery. There he serves mainly burgers. Think lamb jalfrezi burger with minced lamb on raita with onion bhaji, topped with a feisty jalfrezi sauce. His one non-burger item is an Asian wors roll. This is ouma’s wors served with kimchi ketchup, wasabi kewpie, deep fried ginger, crispy seaweed and sesame seeds.
The only downside to these fabulous flavours – well,  to the four ladies who sampled his food, that is – is that it’s wasted on burgers. Posh or not.  That quibble aside, the discerning ladies (who don’t do lunch actually, but who make food their business) raved over what they ate. 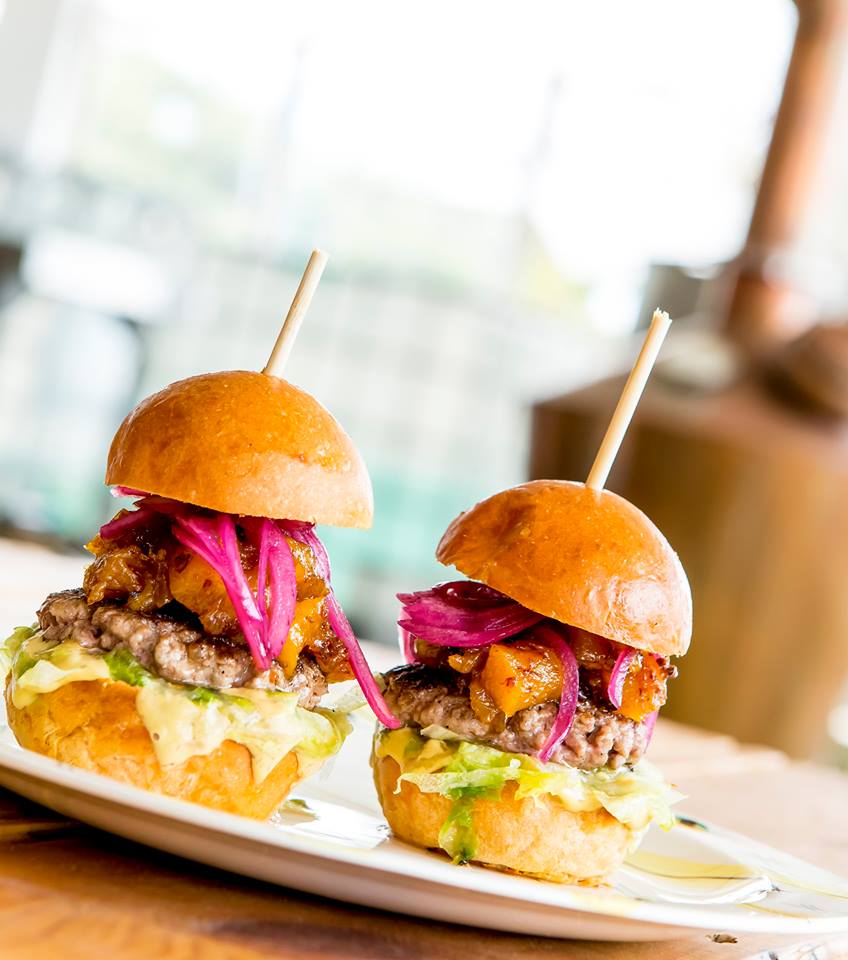 THE VENUE
Distillery 031 is super cool and trendy space with huge windows and high ceilings. Warehouse chic, in other words. On the one side is the distillery which produces gin, vodka, absinthe and tonic water and on the other side is a small, open plan kitchen and a long bar.  Seating is at long wood tables and benches which is probably best suited to young bums – as opposed to old bums. Meaning mine. So, not particularly comfortable if you are planning to linger and that’s what you will want to do after a cocktail or seven.  On the other hand, there’s nothing like a G&T to numb the bum. 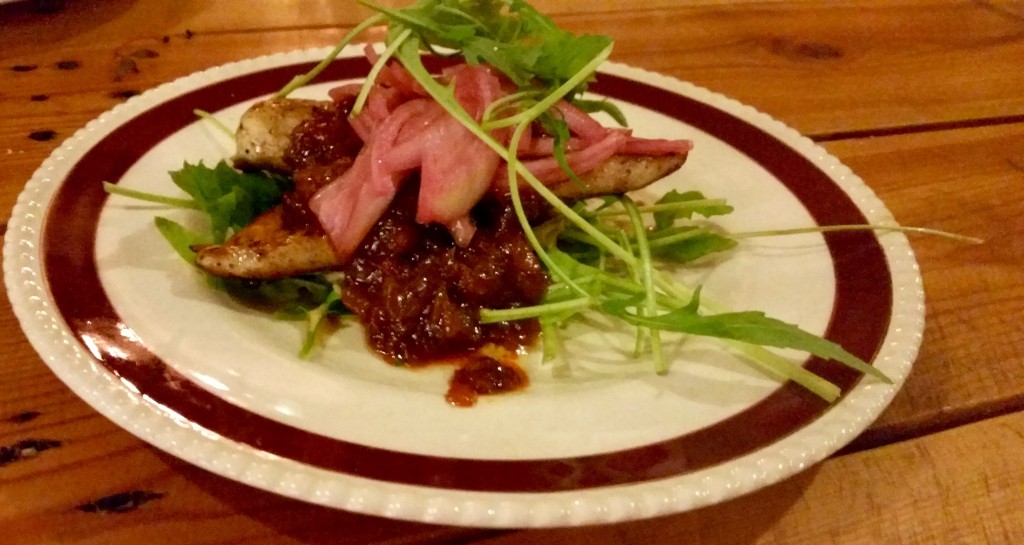 Chicken lickin’ burger without the roll

TO THE FOOD
As I said already, sublime flavours. It’s a small menu with three starter options, five mains and three desserts.
We started by sharing two plates of truffled biltong mac ‘n chini (four balls for R35), which is deep fried balls of mac ‘n cheese with biltong, truffle and bri. This was sublime with its crispy exterior and  gooey interior. Jason also does fries (either done in beef fat or tossed in truffle oil) served with wasabi kewpie, kimchi ketchup and bun sauce. We opted for the truffled fries, R30 a portion. The sauces were spectacular, especially the kimchi ketchup. It has to be tasted to be appreciated
You can also have the crispy, spiralized zucchini with cayenne pepper and paprika for R25.
For her main Meleney opted for the pineapple, bacon and jam burger, R70, a beef and oxtail burger topped with pineapple, bacon jam, red pickles in a kitke bun. She was fulsome in her praise.
As was Megan about her veg burger, which managed not to fall apart during the eating process. A plus for her. She said she loved the flavours of the deep fried patty of tomato, aubergine and mozzarella topped with basil pesto and rocket. Cost was R70.
Tanya opted for a lamb jalfrezi burger, described in the first paragraph, R90. Apart from her loving the flavours, there was an appealing mix of soft and crispy textures in the dish.
Hampered by the fact that I don’t eat red meat I ordered the chicken lickin burger without the bun, R70. This is grilled chicken breast served with chakalaka jam, red pickled onions and sweet mustard sauce. The chicken was a mite overcooked.  Because I  didn’t have the bun, I found the jam a little overwhelming. But that was me. The others adored the flavours.
Jason also let us try his Asian worse roll, which was very moreish.
The dessert menu comprises of banana split with white miso ice-cream, chocolate sauce and Oreo crumbed; a baked alaska cuppa, which was not available, and an ice-cream and sorbet selection. We shared the banana split, scoops of vanilla ice-cream and mojito sorbet. Everybody enjoyed the banana split and the sorbet, but the overall favourite was the vanilla ice-cream. Best ever said Megan.
This may be humble food but it added up. Our bill for four came to R799 without tip and included a cocktail, two G&Ts and plain tonic water. Their tonic water was delicious.

DRINKS
Their signature cocktail menu includes the likes of an 031 Cosmo with naartje and rooibos aperitif, 031 vodka and cranberry juice; Vanilla, Boabab and Ginger Jar with a triple distilled vodka, fresh mango and ginger beer; an Unpretentious Empress with gin shaken with vanilla and boabab and fresh lemon; and a Bohemian Caipirinha with 031 cachaca made from local sugar cane. muddled with fresh lime wedges and sugar, served over a 031 absinthe.  Plenty of local flavours here, as you can see.

VIBE AND SERVICE
Warm and very friendly and the service was superb.