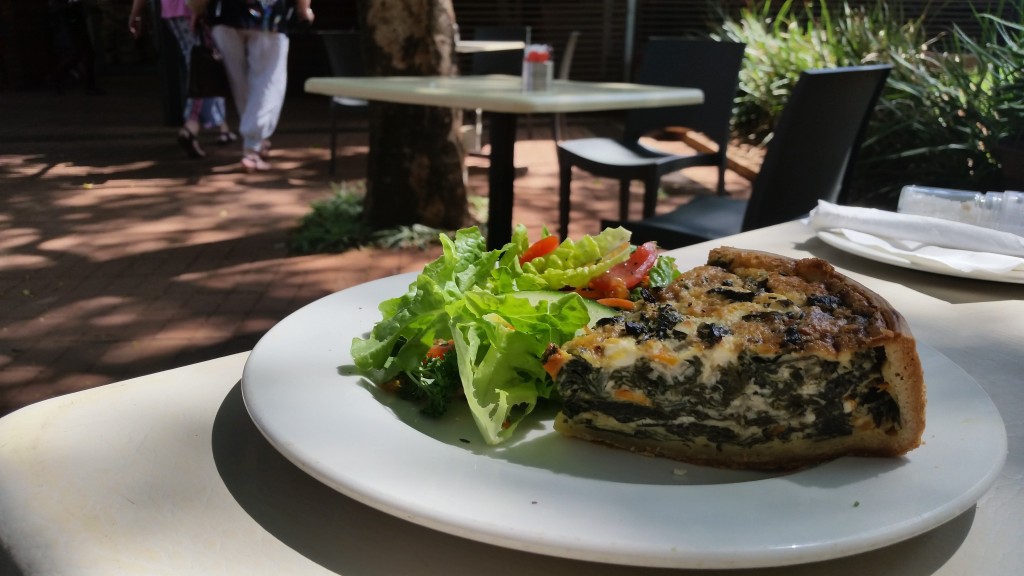 Spinach and feta quiche at the Arts Cafe.

The Arts Cafe and I go back a long way, back to when it was run by Ralph Bronzin. It was during one of our chats over coffee that he suggested I run a cappuccino competition. Fifteen years later, the Sunday Tribune’s Cafe Society is still going strong.
But the Arts Cafe, which is part of the KZNSA Gallery, hasn’t fared as well and has had more downs than ups over the past few years. And what a shame. It has a lovely setting, looks over a park, has an art gallery with new exhibitions every few weeks, and a gallery shop which has been presided over by the inimitable Gloria Hoff forever. Now the Arts Cafe is on an up and serving good, reasonably priced food. So, if you’ve given it a miss over the last couple of years, try it again. After all, overseeing the kitchen is hugely talented chef Monique Carvers, who some might remember from the Engine Room days, when it was a popular fine dining restaurant in Durban North.  THE LOOK
Casual cafe in style, there is a rather awkward indoor eating area with tables situated on the steps leading to the, um toilets. Better outdoors where you can sit under tall, shady leopard trees. There’s also supervised play area for kids. Which is a win win for those who hate kids (at least they’re not underfoot) and for those who need a break from them (their parents).

TO THE FOOD
Like it’s look it’s casual cafe, with a very extensive breakfast menu, ranging from the healthy and Banting to the indulgent. They make an excellent eggs Onassis, by the way, with perfectly poached eggs, homemade hollandaise sauce, seaweed caviar, capers and dill. Singled egg  is R45, double is R79. You can also add avo. Mediterranean breakfast is vegetarian and includes grilled halloumi, hummus, olives, roasted tomatoes and pita, R57. Banting option include roasted tomatoes, mushrooms, avo, onion, eggs, bacon and parmesan, R62. If you want to go decadent try the crumpets served with double cream yoghurt, pistachio nuts. honeycomb, pomegranate and real maple syrup, R42.
There’s both special breakfast and lunch menus for kids.
Lunch meals include quiches, salads, pasta and a rump steak served with hasselback potatoes, wilted baby spinach, and roasted butternut. With mushroom sauce it’s a modest R87.
There’s also five meat burger options and one vegetarian. Also open sandwiches and lite bites which include courgette, peppers and corn cakes served with avo salsa and coriander pesto.
I’ve tried both their chicken and vegetarian quiches, which are served with salad, R57. Both were rich and creamy, and generously portioned, as was the salad. Real winners.
My sister-in-law praised the grilled aubergine and falafel salad served with grilled peppers, feta and cashew nuts, R67. She said the falafels were perfect, crispy on the outside and soft inside. A friend was as enthusiastic about the chicken, mushroom and coriander pesto fettuccini, R58.
The only minor disappointments was the Asian chilli, honey and soy chicken bowl with rice noodles, baby spinach, mushrooms and peppers, R69, which sounded better than it tasted.
This has become my new local and after years of staying away, I’m happy to be back, under the trees. Oh, and the cappuccinos are always good.

SERVICE
Much better under new regime and charming.

LOO REVIEW
Functional, no frills loos but reasonably clean with a changing table for babies.