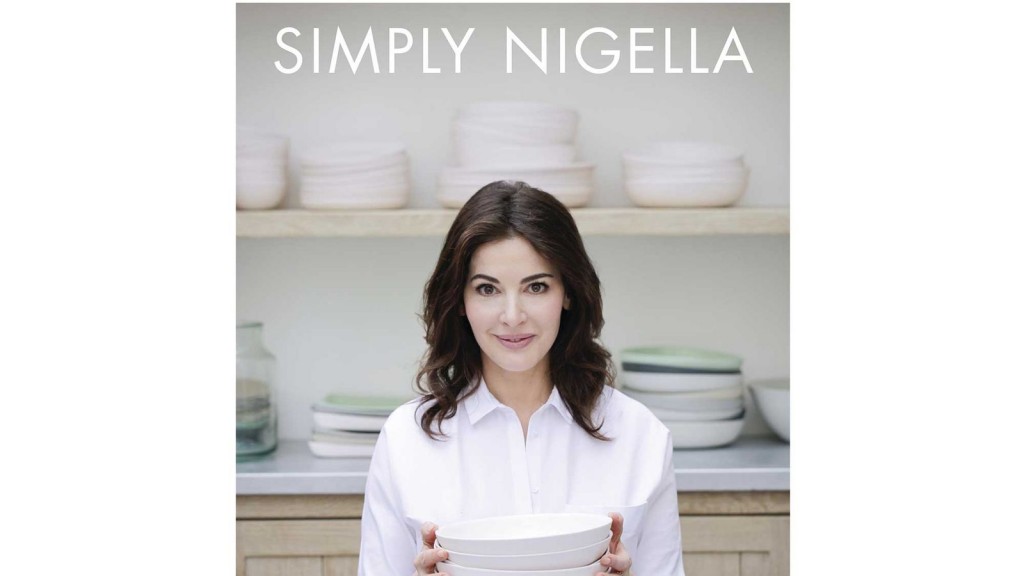 Nigella Lawson looks about 16 on the cover of her latest cookbook. The power of photoshop perhaps? 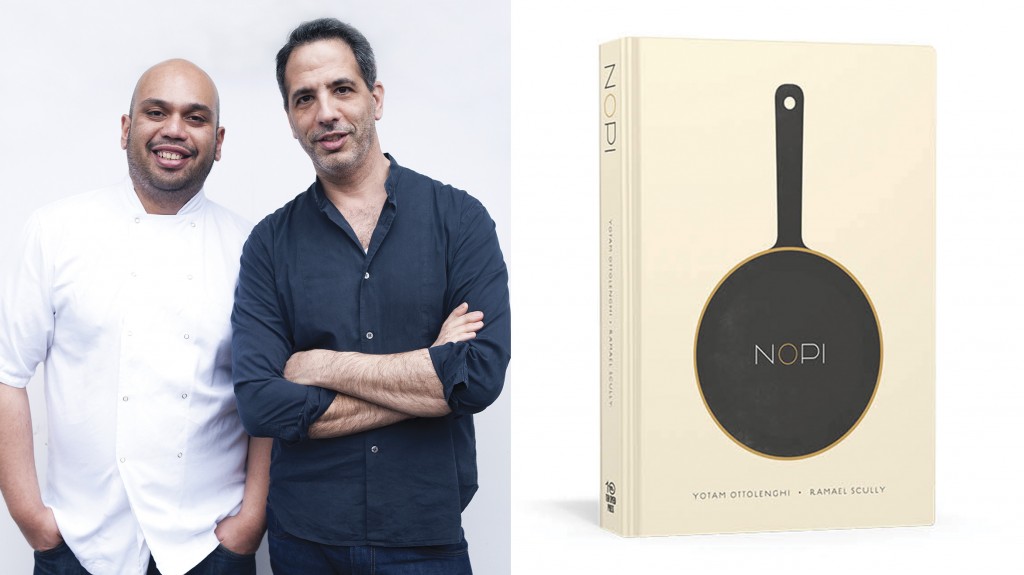 Ramael Scully (left) and Yotam Ottolenghi and the cover of Nopi, the book on which they collaborated

Two new cookbooks that will make ideal Christmas gifts – for yourself of course. Ingrid Shevlin browses through and salivates. And there’s two recipes to inspire

No two books could be more different than these two. While Ottolenghi’s NOPI feeds the soul, Simply Nigella feeds the stomach. Happily, both are essential when it comes to food.
Nigella is probably known to you, thanks to her TV shows, recipe books and her much-publicised marriage to, and bitter divorce from, wealthy and reclusive art collector Charles Saatchi.
In turn Ottolenghi has made his name largely through his recipe books and his London restaurants.
Ottolenghi was born in Jerusalem and completed a master’s degree in comparative literature before moving to the UK in 1997 to start a PhD. Instead he signed up at Le Cordon Bleu cookery school in London – and the rest is history.
Ottolenghi’s cooking is rooted in his Middle Eastern upbringing, but also has western and Asian influences, and he has a world-wide following. Now comes his latest cookbook, but it’s one with a difference.
NOPI the book is based on the food served at NOPI his London restaurant, presided over by head chef Ramael Scully, and it shares their personal and culinary journey. But, as Ottolenghi warns in the forward, the recipes are challenging, but insists they are “spectacularly delicious” too. He says it’s basically a restaurant cookbook featuring restaurant food, Reassuringly, he adds that he and Scully have modified the recipes to make them more home-cook-friendly.
The book is gorgeous looking and marvellously inspiring and if you love cooking, it’s for you. It’s worth the effort you’ll need to recreate NOPI’s food. No shortcuts here as far as I can see. But if you can barely boil an egg, think of it as food pornography – designed to stimulate the senses and imagination.
So what’s on the menu?
Starters include fried baby artichokes with pink peppercorn aioli; chargrilled asparagus with romesco sauce and apple balsamic; butternut squash with ginger tomatoes and lime yoghurt (recipe below); truffle polenta chips; and pea soup with rolled goats cheese croutons.
Salads include a gorgeous looking three citrus salad with green chilli, stem ginger and crunchy salsa; and a watermelon and feta salad with marinated olives and preserved lemon.
Sides feature the delicious sounding crushed baby potatoes with caper berries, pink peppercorns and roasted garlic; and butterbean mash with rosemary and garlic
The fish section offers king prawns with pernod, tarragon and feta; and sea bream with mango and papaya salad.
Under meat there’s lamb meatballs with warm yoghurt and swiss chard; and smoked lamb cutlets with aubergine puree, jalapeño sauce and kohlrabi, which you’e not going to rustle up for mid week meal, believe me. The twice-baked chicken with chilli sauce and lime leaf salt requires an overnight marinading in Asian master stock (which you have to make first). I plan to try this.
Then there a whole section devoted to vegetables. Think baked blue-cheesecake with pickled beetroot and honey; and pickled chickpea patties with coconut and curry leaf paste.
A brunch section includes ham hock with baked beans, fried egg and sourdough; and potato pancakes with yoghurt and date syrup.
Desserts are quirky and range from poached quince with raspberry and quince jelly and mascarpone sabayon; to popcorn ice-cream.
He even shares cocktail recipes and ends with condiments, stocks and jams. At the end, 300 pages later there’s an A- Z of ingredients. And it’s here where possible problems become apparent. Where do you find annatto seeds (Mexican), black garlic, chipotle chillies (now at selected Woolworths shops as it happens) or Pedro  Ximenez sherry vinegar. But don’t let this deter you. There are plenty of accessible recipes.
Here’s a recipe from Ottoplenghi’s book, which can be a main meal or a side. The cooking temperatures seem very high. So use your commonness and keep checking the food.

Lime yoghurt:
120g Greek yoghurt
1/4 teaspoon ground cardamom
Finely grated zest of half a lime plus one and 1/2 teaspoons of lime juice

2  Mix the squash with 2 tablespoons of the oil, 2 teaspoons of salt and good grind of pepper. Spread out on a large parchment-lined baking tray and roast for 35 to 40 minutes until golden-brown. Set aside to cool

4  Place tomato halves on a parchment-lined baking tray, skin-side down. Sprinkle with 1/4 teaspoon of salt, drizzle with last tablespoon of oil and cook for 80 minutes until softened.

5  Place the ginger, chilli, garlic, sugar and 1/4 teaspoon of salt in a medium bowl. Mix to form a paste, then spoon on top of tomatoes. Cook for another 40 minutes, until caramelised and set aside to cool.

6  Place all ingredients for the lime yoghurt in a small bowl with 1/2 teaspoon of salt and a good grind of black pepper. Mix well and keep in fridge until ready to serve.

7  Spread the squash out on a large platter and arrange the tomatoes inbetween. Drizzle over the lime yoghurt, sprinkle with coriander, cashews and shallots, if using, and serve.

Simply Nigella
Nigella Lawson is definitely the culinary world’s sexiest representative and, even better, it looks like she actually enjoys eating. But she’s also something of a reactionary in that she loathes the term “healthy” food. In fact, in the forward to her latest book, she writes that she also hates the new-age  voodoo about eating, the idea that foods are either harmful or healing, as well as the entire “clean-food brigade”. Food is not dirty she writes, it’s one of the pleasures of the flesh. Atta girl!
The secret to health and happiness she believes is that when you cook for yourself is is essentially good for you – an act of positivity.
In this book Nigella taps into the rhythm of our lives with recipes that are simple, relaxing to make and satisfying.
The book is divided into categories such as Quick and Calm, food that is quick and undemanding. Such as crunchy chicken cutlets with a spicy touch; Indian-spiced cod; and cauliflower and cashew nut curry.  Then comes Bowl Food, one bowl meals with an Asian influence.  Think Thai noodles with cinnamon and prawns; and Chinese inspired chicken noodle soup. This is followed by Dine,  recipes for make-ahead dishes for easy entertaining. Examples are oven-cooked chicken shawarma and butterflied leg of lamb.
Breathe covers slow-cooked food you can make ahead, freeze and reheat when friends pop round unexpectedly. Like wassermann beef curry; oxtail on toast; Asian-flavoured short ribs, and slow-cooker Moroccan chicken stew. Sides are many wonderful ways with veggies.
Then comes Sweets. Her apricot almond cake with rosewater and cardamom sounds divine. She’s at her best at desserts, I often think, and this section is sure to tantalise the tastebuds of those who enjoy the evils of sugar.
I like the sound of her recipe for date and marmalade Christmas cake, Something a little different this Christmas. She ends her book with a chapter entitled Beginnings, new ideas for breakfast.
This is definitely a one-stop cookbook for both the beginner and the enthusiastic cook. Inspired by cuisines from around the world it covers pactically everything you need need to know about cooking. I love this book. It’s unfussy food that will taste good. I know that as I have most of her other books and they are the ones I return to time and time again.
Here’s a recipe to warm the stomach.

1  Preheat oven to 200C/gas mark 6. Put on large pan of water to boil with lid on to make it come to the boil faster.

2  Peel sweet potatoes and cut them roughly into 2-3cm pieces. When the water’s boiling, add salt to taste and then the sweet potato pieces and cook them for about 10 minutes or until they are soft.

3  Scoop them out of the water into a bowl – using a slotted spoon – and lightly mash with a fork, without turning them into puree. Don’t get rid of the water as you will need it to cook your pasta in later.

4  In another saucepan, gently melt the butter and add the flour, whisking to form a roux. Then take the pan off the heat and slowly whisk in the milk and, when it’s all combined and smooth, put back on the heat. Exchange your whisk for a wooden spoon and continue to stir until your gently bubbling sauce has lost any floury taste, and has thickened.

5  Add mustard and 1/4 teaspoon of paprika. Season to taste but remember you are adding cheddar and feta later so don’t go overboard.

6  Cook the pennette in the sweet-potato water, starting to check it two minutes earlier than the packet’s instructions as you still want it to have a bite.

7  Drain – but reserve some of the cooking water again – and then add the pennette to the mashed sweet potato and fold in to combine. The heat of the pasta will make the mash easier to mix in.

8  Add the feta cheese to the potato and pasta mix, crumbling it in so that it’s easier to disperse evenly. Then fold in white sauce, adding 125g grated cheddar as you go. Add some of th pasta cooking water should you feel it needs loosening up.

9  Check seasoning. Spoon the mix into 4 small ovenproof dishes (around 374 x 425ml capacity) or one large rectangular dish (around 30 x20 x 5cm deep with a 1.6l capacity). Sprinkle over remaining cheese and paprika. Shred sage leaves and scatter over dish/dishes.

10  Put pots on a baking tray and pop into oven and bake for 20 minutes, 30-35 minutes if you are using the larger dish. Serve piping hot.