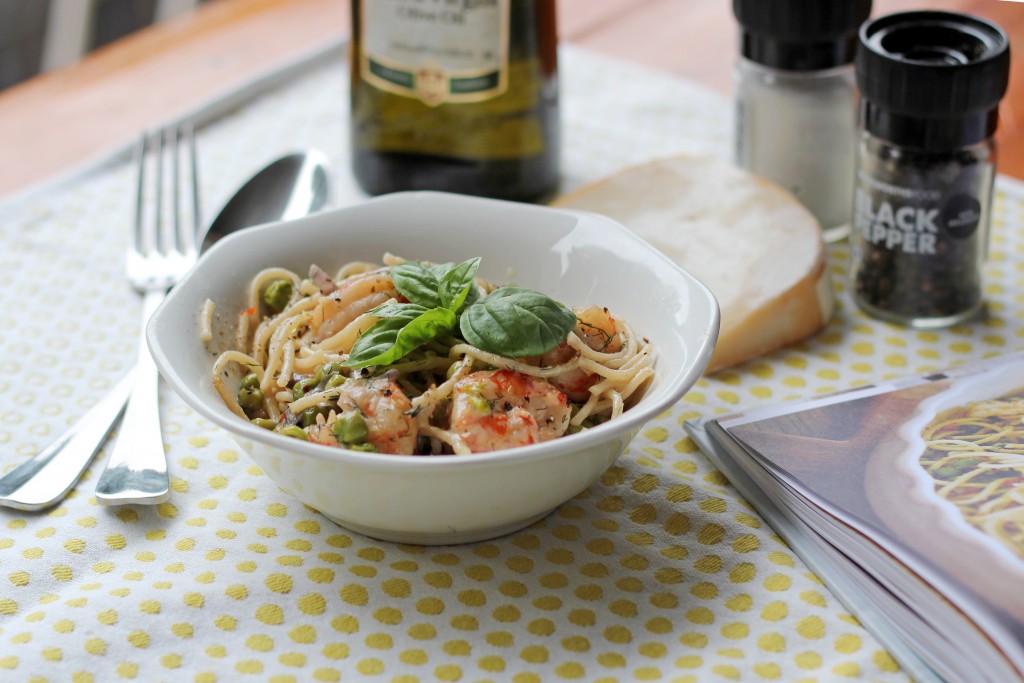 I like to think of myself as a bit of a foodie. I like eating and I like cooking, although I’m still new to it – the cooking, not the eating. Even so, when, after three months of marriage my newly acquired husband Jean-Paul  was having a birthday, it seemed only natural to cook him a birthday feast.
Inspiration for the meal came from a recipe book my mother gave me before my husband’s birthday – Tashas by Natasha Sideris (Jonathan Ball). Natasha Sideris is the creator and founder of Tashas restaurants. Having started with one restaurant in Atholl, Johannesburg in 2005, Tashas has grown to include 12 stores nationally, including one at Gateway, as well as one in Dubai.
More used to my mother’s collection of 1970s cookbooks, the images of  beautifully-presented food in Tashas were particularly appealing. The book is divided into chapters. Each chapter is neatly laid out and each recipe is placed alongside its corresponding photograph. Photographer David Ross has done a great job of capturing images that reflect the relaxed, sociable approach to food that Natasha articulates so well in her introduction to the book.
Natasha’s strong Greek heritage is also reflected in her book, which is sprinkled with memories of a childhood filled with meals and kitchens and the magical mysticism of cooking that is so often portrayed in movies about food. Aside from this, the recipes are clear and concise.
But do they work?

I put two of Natasha’s recipes to the test for this very special birthday dinner. Being a serious pasta addict, I was pleased by the presence of a decent pasta section. From it I chose a prawn and pea spaghetti. The recipe called for 25 shelled and deveined prawns. I generally avoid cooking fresh seafood because I’m scared of raw fish juice. As we all have to face our fears at some point, I committed myself to the task.
I bought my prawns at Bartho’s in Durban North, which has a wide range of fishy options. I was slightly disappointed at how many of these options were frozen as I was looking forward to taking home some really spiky, googly-eyed fishy friends to fillet. Alas, I left with only my pack of frozen, very clean prawns.
The recipe was so easy to follow it could even be considered fool-proof. While I did have a small meltdown when I spilled defrosted prawn juice into the washing machine, I got over it when I stirred the required mascarpone into the prawny, pink goodness that was simmering on the stove. I did find the prawn-to-pea ratio slightly off and felt I was eating more peas than anything else. But this was quickly forgotten in the presence of my husband’s awe at being presented with prawns.
For dessert I made Natasha’s beautiful panna cotta. Now I had made this two weeks earlier and had used the double cream that the recipe called for. Woolworth’s is usually the only place I can buy double cream, but on this particular day it was out of stock. I must admit I haven’t yet become so confident a cook that I deviate from recipes, but in this instance I had no choice. I bought regular pouring cream and spent the next half an hour mixing the creamy, vanilla deliciousness.
As it happened I found the panna cotta actually worked better without the double cream. It didn’t get the thick skin we had experienced when eating it before. Tashas’s recipe calls for fresh berries with the panna cotta but I topped mine with strawberry compote. It was a real treat. You can really top it with anything that goes well with the cream and vanilla flavours. Previously I had poured citrus syrup and crushed Amaretti biscuits on top. Delish!
Tashas is a truly accessible cookbook that doesn’t overcomplicate things. The fact that it was written in a South African context means that readers can easily understand and interpret its contents without feeling intimidated by the idea of cooking. There are no ounces or pounds or unknown ingredients.  Its clean and appealing layout allows readers to skim through and find delights to cook.
I can easily imagine recipes from this book becoming family favourites in homes. This might be the aim of the book; to have families celebrate good, simple food, slowly and happily. – Milly Brouard is a new contributor to shrewdfood who describes herself thus .. “I love my husband, cats, the sea, pasta and homey cooking.” 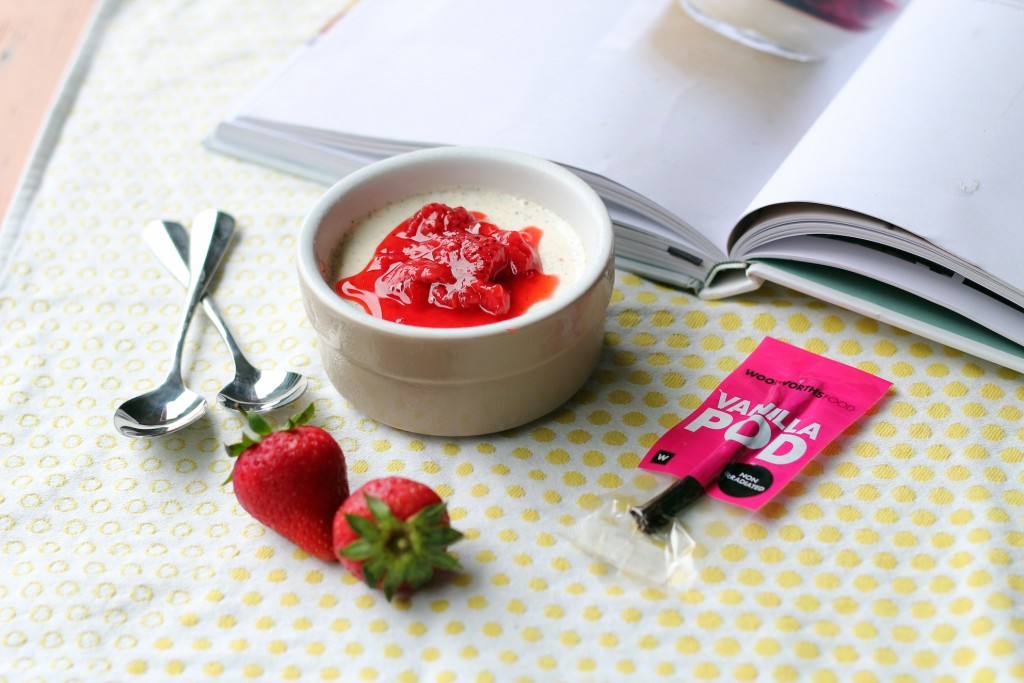 1  Soak gelatine leaves in a little cold water until soft.
2   Open the vanilla pods lengthways and scrape out the seeds.
3  Warm the milk, cream, sugar, vanilla seeds and the pod in a saucepan.
4  Bring to the boil and then remove from the heat. Take out the vanilla pod and discard.
5  Squeeze the water out of the gelatine leaves and add them to the milk. Stir until the gelatine has dissolved.
6  Divide the mixture between 4 small dishes or pretty glasses and leave to cool before placing them in the fridge.
7  Leave them in the fridge for at least an hour or until they have set.
8 Top with mixed berries.

*I found the panna cotta needed about three or four hours to set.

1  Preheat the oven to 200c
2  Toast the ciabatta slices in the oven. When they are very dry and crispy, grate or crush them into fine crumbs.
3  Defrost the frozen peas.
4  Cook the pasta in a large pot of boiling, salted water, and start making the sauce.
5  To make the sauce, season the clean and shelled prawns with salt and pepper.
6  Melt the butter in the pan with the olive oil and sauté the onions until soft and translucent.
7  Add the prawns, chilli flakes, fish spice and pan fry. You’ll know they’re cooked when they start to become opaque.
8  Squeeze in the lemon juice and stir in the mascarpone.
9  Bring the sauce to the boil and mix in the peas for just a few minutes. Don’t overcook or the peas will lose their colour and begin to wrinkle.
10  Add the dill just before serving. Spoon the sauce over the cooked and drained pasta, sprinkle with the ciabatta crumbs and serve.
Serves 4