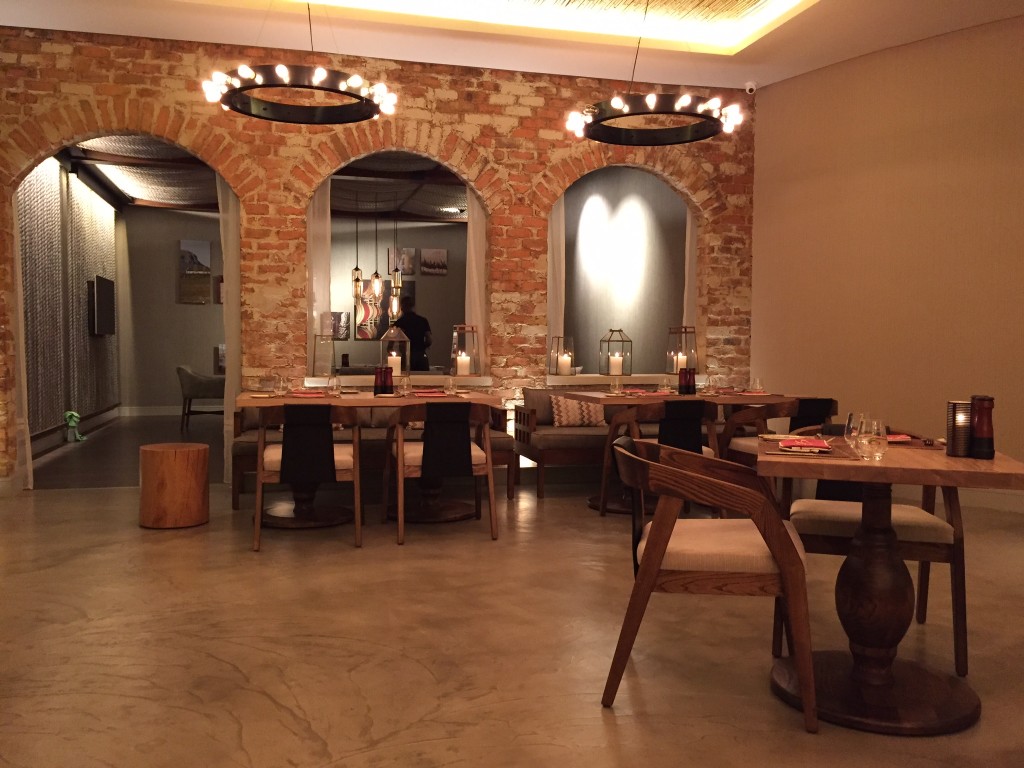 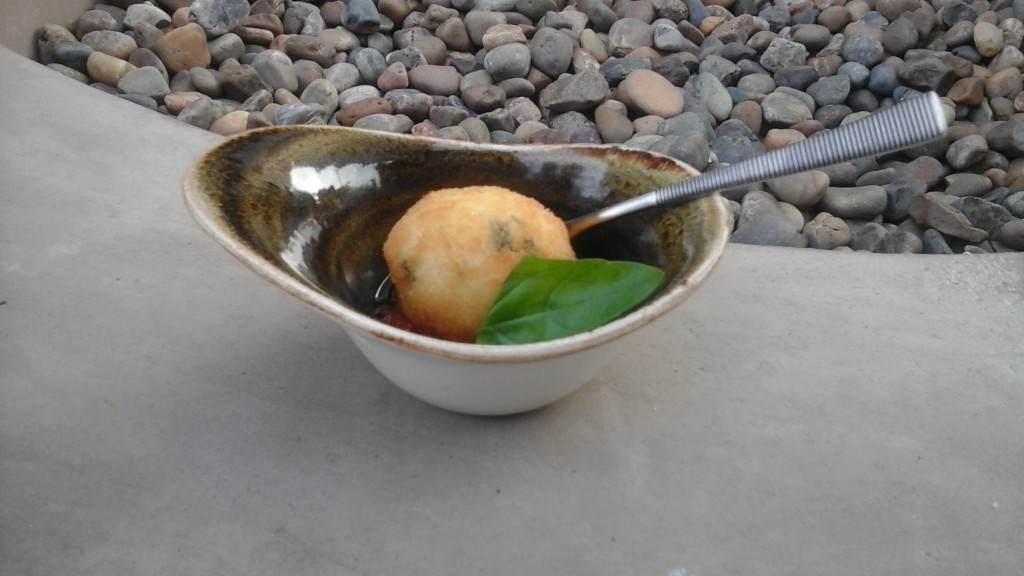 Anarchic balls made with pap, not the traditional risotto rice.

While South African golfing legend Ernie Els has not quite swopped his golf clubs for the kitchen stove, his new restaurant, the Big Easy, offers him not only the chance to showcase his talent as a winemaker, but also share his knowledge and experience of restaurants.
“Having travelled the world and dined out literally thousands of times, I understand the essence of what makes a great restaurant. It has to have warm hospitality and a fun, relaxed environment”, says Els
This he has achieved at the Big Easy, which is his nickname incidentally, thanks to his imposing height.  Although I admit to having had some initial trepidation when suggesting the family eat there two days after its formal opening on October 8. You see, I’ve rarely dined  at a hotel restaurant – even a five-star establishment – and not wondered if the food had been cooked by numbers in a central kitchen operated by conveyer belt cooks.
But, boy, was I wrong.

The Big Easy has its own on-site, open-plan kitchen with a dedicated staff. The result is damn fine cooking and surprisingly reasonably priced food, considering its location. Then again the collaboration with the Hilton is more Ernie Els than the five-star hotel, as this is his second Big Easy. The first being in  Stellenbosch. Clearly he knows his business.

The LOOK
Big Easy has a very stylish interior design that manages to combine the contemporary elegance of textured leather seating, designer cutlery and crockery with the rustic charm of bare brick walls, brushed cement flooring and wood-beamed ceilings. Bottles of Ernie Els’s wines and golfing memorabilia line an inner feature wall, paying tribute to his many achievements. Although a very large restaurant, clever design elements manage to create spaces of warmth and intimacy. There’s also a charming terrace for those who prefer to dine al fresco, although who would want to in this heat. Smokers perhaps?

TO THE FOOD
The food is traditional South African but with a twist. Menu is sensibly modest in its options, but all tastes are met. Food is proudly locally sourced and the meat organic and free range.
Starters include curried Karoo lamb and apricot sosaties; mini boerie rolls; and vegetable babotie puri. There’s also pap aranchini (made with pap not risotto rice) and slow-roasted pumpkin soup.
Salads range from cold smoked wayfarer trout to a chilli spiced curried salmon served with dill baby potatoes, green beans and quail eggs and drizzled with a fynbos and honey dressing
The grill selection includes a range of steaks and boerewors. Also lamb cutlets and peri peri chicken. Sauces rang from pepper to bordelaise. Side orders include vegetable chakalaka and mushroom casserole.
One of the chef’s favourites is a seafood casserole Durban style, while Ernie’s own favourites are a big easy burger and the ”mother of all baked potato”. This comes topped with duck confit, bacon and salut cheese.
We opted to go straight for mains although my brother and I included a fennel, beetroot and orange salad, drizzled with a citrus, sherry and hazelnut vinaigrette dressing, R65. This was surprisingly insipid.
Not so my main; seared Cape salmon served with peas and mangetout in a light white wine reduction sauce, R130. It had lovely, delicate flavours.
The son-in-aw opted for Durban lamb shank bunny chow, R140, and was effusive in his praise.
The daughter and a friend ordered fillet steaks (R170 for 200g and R195 for 250g), which were so tender they literally melted in the mouth. R25 exra for gorgonzola sauce (which could have had more gorgonzola said the daughter) and R30 for mashed potato.
But the brother had perhaps the most interesting meal; paneer makhani, which was sautéed paneer in a rich, saffron tomato curry sauce, R85. The flavours were absolutely sublime. We ended with a strawberry panna cotta  and a platter of mini South African deserts which included milk tart and koeksisters. A fitting end to an excellent meal.
Bill came to R1 280 for five people and included wine and craft beers. Big Easy stocks not only Els’s signature wines but those from other South African winemakers.

LOO REVIEW
A visit to the loo requires a trek to the foyer where it is rather cunningly hidden. Still, each cubicle is completely enclosed and offers the kind of privacy you need at these times. Pristine in appearance.

SUMMING UP
Nice vibe and great food. If I had a complaint it would be that the food needed serious salting.
It was interesting to discover that Ernie Els is a man of so many parts.  Not only is he a professional golfer who was inducted into the World Golf Hall of Fame in 2011, he is an up and coming winemaker and a restaurateur as you now know. But he also heads a foundation which supports young golfers from disadvantaged backgrounds in South Africa and fundraises for autistic charities – his own son is autistic. He also designs golf courses and writes golfing manuals. – Ingrid Shevlin, October 14, 2015