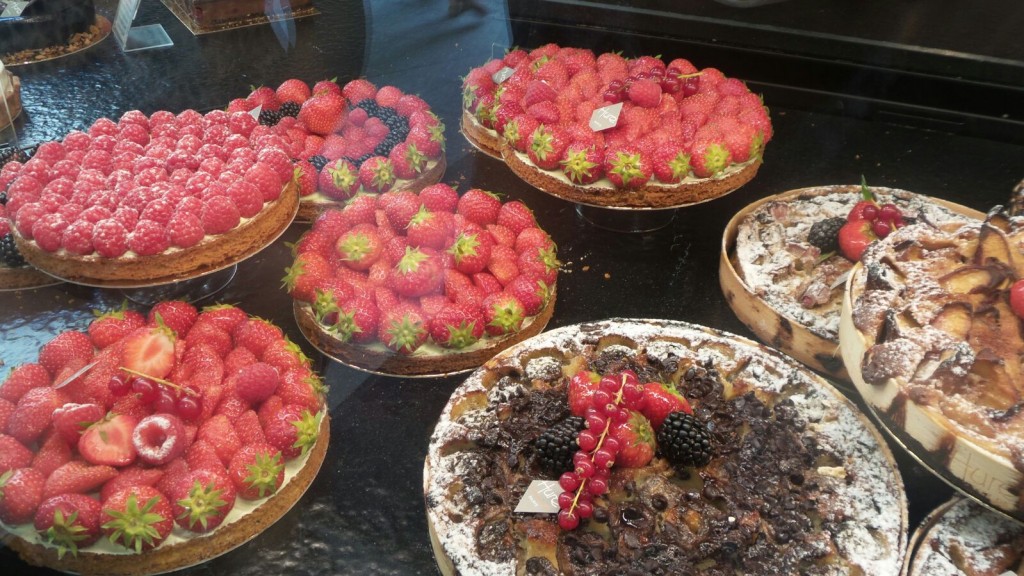 Cakes to die for at a patisserie in Paris. More works of art than food. 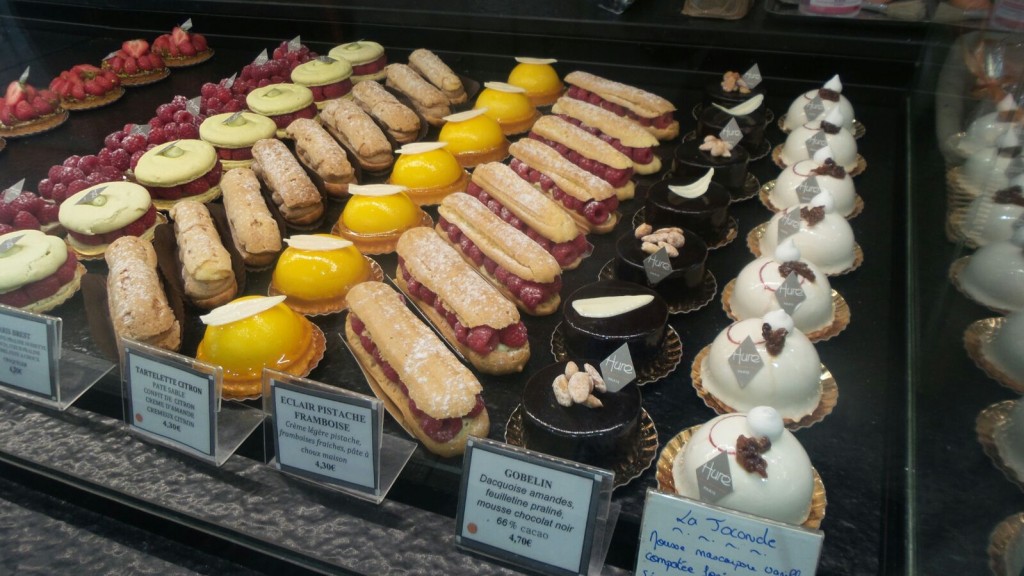 Hard to resist this display at a patisserie shop in Paris.

Ripped off by Harrods disappointed by Paris’s Chinese food and disdained by the French waiters, Ingrid Shevlin, shares her alternative culinary experience abroad.

After spending a month in the UK, and four days in Paris, I wish I could report amazing dining experiences in the French capital, at Nopi, Ottolenghi’s eatery in London, or at any of Jamie Oliver’s restaurants in London (Fifteen, Diner, Covent Garden). Or even at that exclusive Japanese restaurant in London that seats only nine and has just won its second Michelin star. It charges a staggering £300 for a set meal, which is about R6 000.
But with the crippling exchange rate – R20 to the pound – those were far beyond my means and dreams. But eat out I did with some interesting results.
The standard of ethnic food at local restaurants in Haringey, where I stayed with my sister, was suprisingly good. Haringey is a borough in the east part of London and probably the most cosmopolitan in the city. Greeks, Turks, Cypriots, North Africans, Middle Easteners and what seemed to be the entire Eastern Bloc live in Haringey. As a result English as a first language is probably the exception rather than the rule.
An upside to this is a range of very good and reasonably-priced ethnic restaurants and what seemed like hundreds of small owner-run shops including  “corner” grocery outlets, which sold practically everything in the food and deli line, including newspapers. Not clothes of course.  You could even top up your Oyster travel cards there, which was very useful as most remained open until late, some  even 24/7. These corner grocery shops added to the strong community feel of the neighbourhood. It was particularly encouraging to see the prevalence of individually-owned shops over the big chains. Elsewhere in Britain you hear of supermarket chains killing off small family shops in small towns, but in Haringey they are alive and well. And kicking back.
To the food.
Fried chicken restaurants are practically epidemic in London and Haringey had their fair share. Versions of KFC they offered cheap and filling fast food. Not that I sampled any. I don’t do deep fried chicken of any kind. Although there was one little cafe which grilled their chicken instead and offered four different flavourings. Nice and cheap food.
The  food at the Turkish restaurants I came across was particularly good and inexpensive. Selale was a example. If, for instance you ordered grilled chicken on a skewer it came with rice or chips. But at Selale salads, baskets of hot flat bread, humous and other dips were served free with it as well. Unless you are Billy Bunter (remember him?) you’d find it hard to finish it.
Another winner was an Italian restaurant five houses away from my sister’s terraced home, Durazzo Pizzeria, which served really good food, also reasonably priced. The service was so good and friendly we felt almost like family on our third visit. As to their food, nothing was drenched in napolitana sauce and the flavours were delicious and unlike any Italian food I’ve eaten in Durban. Here we tend to over-rely entirely on napolitana sauce.
Here are some low and highlights of our trip.

Highlight 4: The food at Camden Market. This market in Camden is famous for many things, not the least being its food section.  Just about every country’s culinary heritage is represented at the market and it is a feast for all the senses. I particularly remember a chicken curry which had all the enticing flavours and aroma of a traditional Indian curry without the heaviness, without the richness. It was inspired. Every kind of Asian cuisine, Middle Eastern, North African, Mediterranean and food from all parts of the Indian sub-continent is represented.

PARIS
Lowlights:
We stayed in a flat in the the Chinese quarter of Paris. Chinese immigrants dominate the food and leather industries in the area. Located near the George Pompidou Centre, the flat was a quick gateway to Paris’s other attractions.
With a row of Chinese and other Asian restaurants below our window it made sense to eat Chinese.
Mistake.
It was the worst, very worst Chinese food I’ve ever eaten. We were hampered at the first restaurant by the menu being in French and the waitress being unable to speak English. We ordered by pictures. I had a chicken stir fry with rice which was memorable only by its utter lack of any flavour.
Undaunted we tried a second Chinese restaurant, which was always packed with Chinese people and looked more promising. The menu was in French with rudimentary English translations. I opted for spicy, crispy chicken with rice. Again pretty tasteless, and the chicken looked suspect. Was it actually chicken or a soya substitute? The daughter ordered salt and pepper chicken with noodles. She took one look and refused to even take one mouthful. My sister played safe by opting for stir fried bok choi and noodles. It gave new meaning to the word bland.
Swearing off Chinese for ever, we headed for local French cafes and found the food generally dismal. The salads were limp, the portions small, the steaks inedible, the toasted  sandwiches soggy and the service hostile. Serving staff were mainly men wearing white shirts and black trousers.. I’m not sure if they just hated us, women in general, or all tourists,  but they were incredibly rude and dismissive. In contrast the average Parisian was helpful and pleasant when asked for directions.
As for one cappuccino I ordered; it was one-third watery, bitter coffee, no milk and two thirds foam. I had to actually fight my way through the foam to find the coffee.
We may have been unlucky with our choice of restaurants and if we bothered to check sites like TripAdvisor we may have fared better. But, frankly, I think French food is over-rated.

Highlight:
The croque monsieur I ordered after noticing it being served to a fellow diner. It was not on the menu but prepared on request. It’s a baked ham and cheese sandwich with bechamel sauce and was a wonderful combination of crisp bread and hot melted souffle-like cheese. Simple but good.
Another highlight were  the patisseries with their amazing selection of sandwiches, breads, and pastries and cakes so beautiful they looked like works of art. 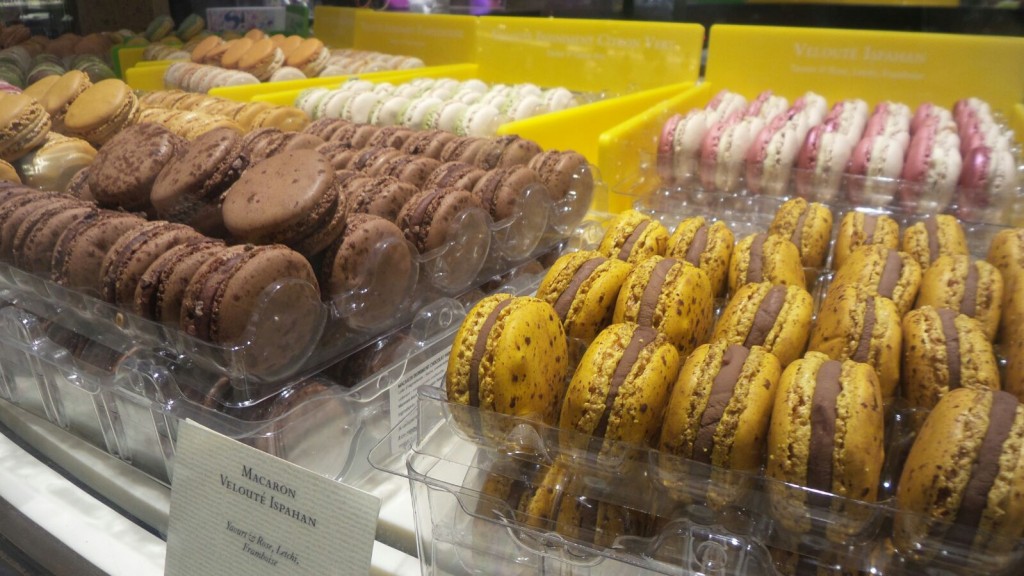 Highlight 2:  Not quite a highlight but certainly memorable. I’m not enough of a fan of macarons to pay their hefty price tag.  I understand they are fiddly and time-consuming to make but they generally don’t taste that marvellous. Still I couldn’t resist the esquisite-looking Pierre Herme macarons on sale at Galeries Lafayette. This is a department store in Paris which stocks every known fashion brand in the world. It is so plush and glitzy, the sales assistants so beautiful/handsome and so impeccably dressed and everything so expensive we felt about as home as a cow would in an abbatoir.
In fact the macaraons were practially all we could afford. Sold individually, they came in such flavours as caramel and salt; chocolat au lait and passion fuit; apricot and peaches; apricots and pistachios; jasmin, peach, apricot and saffron and praline noisette. They cost around three euro each, which translates into around R46. They were nice but not amazing.

LONDON
Eating out in London is hugely expensive but cheaper and satisfying options were available as already mentioned.
Highlight: Eating at Wagamama near Selfridges where food is served canteen-style at long tables with benches on either side. Wagamama is a British-owned restaurant chain serving pan-Asian food in the style of a modern Japanese ramen bar. The first Wagamama opened n 1992 in Bloomsbury London and there are now 100 outlets in the country.
They describe their food as fresh lively and with soul and it was.
I opted for two side dishes: shiitake mushrooms stuffed with prawns and garlic and presented in a light tempura batter; and pulled pork steamed buns served with a soya based sauce.
My sister ordered hot soup served with noodles and topped with chicken, veggies and chilli, which was served in a traditional black bowl. All the food was absolutely delicious. And the portions generous 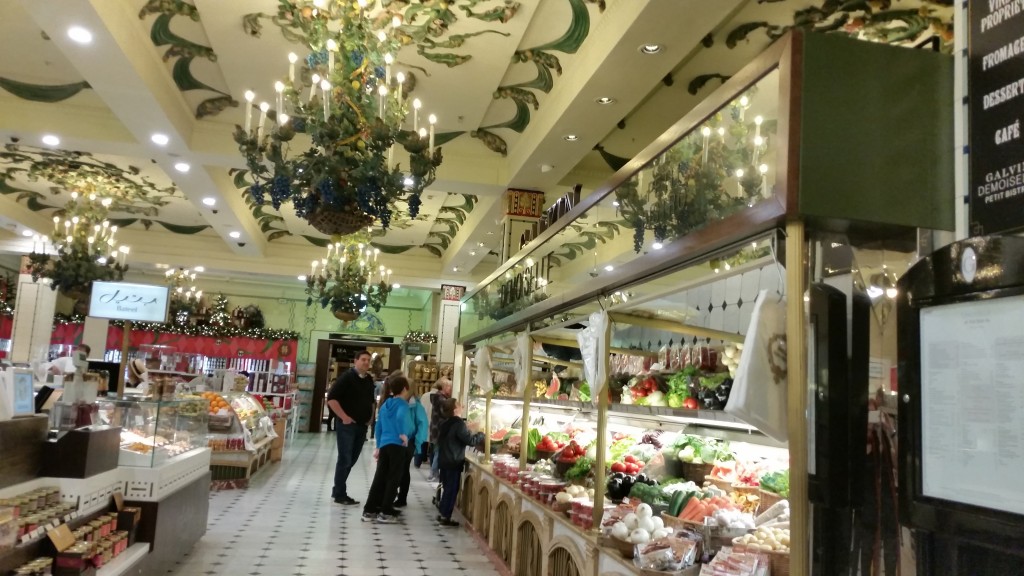 One of the magnificent food halls at Harrods.

Highlight 2: Harrods food halls have to be seen to be believed. There are about six halls, I think, devoted to different culinary pleasures. For instance one was devoted to chocolates and confectionary and another to artisan chocolates and confectionary. There was one for teas and coffees, one for deli items, for veggies and other fresh produce, for meats, for seafood, cut flowers and so on. I noticed a display of apples, for instance, where each apple had clearly been polished to perfection.
Harrods is in a beautiful old building and the halls have these high ornate ceilings. It  it was all so impressive I had the same sense of awe I felt when walking down the isle in Bath Abbey in Bath, a 12th century building.
So, if you go to London and are a foodie don’t miss the food halls.

Highlight 3: Another highlight was coming across a tiny restaurant near Covent Garden serving only jamon iberico, which is a rare type of cured ham produced mostly in Spain. According to Spain’s  Denominacion de Origen rules on food products, jamón ibérico may only be made from black Iberian pigs, or cross-bred pigs as long as they are at least 50% ibérico.
The ham was served on a range of breads with options of additional fillings. Because it was so expensive we opted for tiny rolls filled with slivers of this ham with a touch of mustard. The flavour of the ham  was sublime.

Lowlight: Tea at Harrods where the Earl Grey I ordered was served in a too large pot with only one – only one – teabag. The result was, naturally, very weak tea. That was unforgivable. That cost £4 (R80) – while a plate of our small pastries, which were served cold and were distinctly stodgy, cost me £8 (R160).
Still on the subject of tea. Harrods also offer a tea tasting service and after sampling a range of Earl Grey teas I chose one which cost £13. Expensive but bearable. But the sales lady suddenly said she didn’t have the one I wanted in teabags, but only in loose tea. She presented me with another packet. It was only when the sale was rung up  that I discovered, to my shock, the cost was £25. Now I’m not sure whether to drink the tea or  turn it into an artwork.
My advice? If you are planning to travel  overseas do your research before you go and speak to the locals. Most people are happy to share their knowledge. My best experiences were the recommendations.