This is how you order your food at Eatsa, a new restaurant in San Francisco that is totally automated 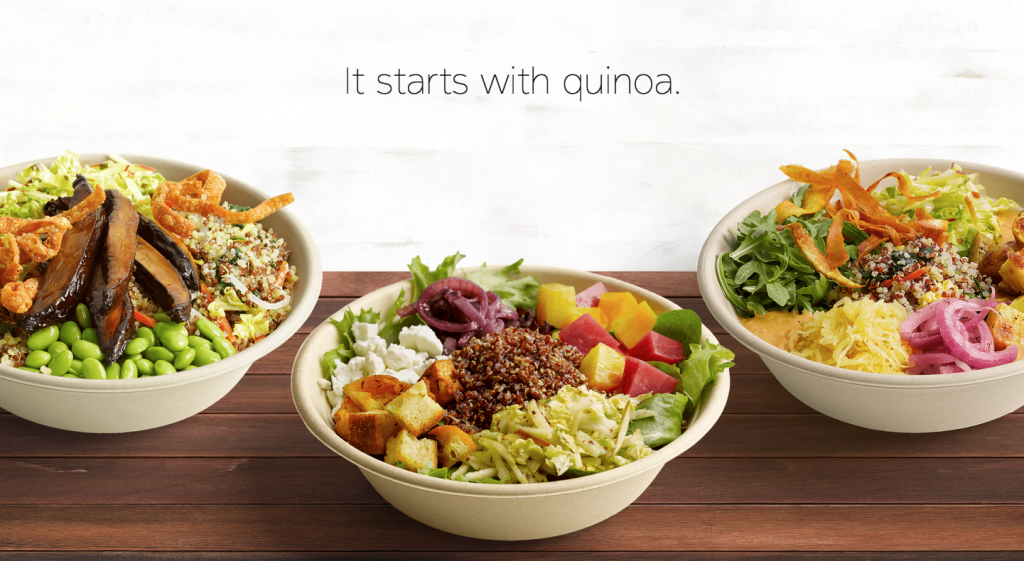 And the result. Delicious looking and healthy food.

FROM the toasted cheese sandwich going gourmet, a Japanese restaurant that allows customers to choose a waitress to be their pretend wife for the night to the latest kitchen gadgets and the wily ways in which restaurateurs rip off their customers, read it all below in the latest news from the wonderful world of food. Thanks to ShrewdFood.

Wife for the night:
A café has opened in Japan that allows customers to chose a waitress who pretends to be their spouse for the evening. Ore no Yome, which means ‘My Wife’ in Japanese, list their staff on their website and provides personality details of each. From this customers can pre-select their “wife”.
When customers visit the café in Tokyo’s Higashi Ikebukuro neighborhood they are met by their “wife”, dressed in only a bikini and a kitchen apron. The “wife” pretends to be their significant other throughout the evening.
An advertisement for the cafe reads: ‘As soon as you know what time you’ll be home, let me know dear! I’ll get your dinner ready’.
But the cafe doesn’t just provide women. Diners can also book a topless man for the evening, called “darling husbands”, who wear tight cycling shorts. What’s not to like.

The Toastie:
The cheese toastie has long been the ultimate comfort food. But now, thanks to some celebrity chefs, they have become gourmet food. Restaurants such as London’s Duck and Waffle offer cheese filling paired with the likes of onion and black truffle purée and mashed potato. And both Jamie Oliver and Heston Blumenthal have given toasties their own stamp.
On Jamie’s website, jamieoliver.com, he says:  “A toasted cheese sandwich is a beautiful thing, but I’m not messing about here – this is the ultimate one and it’s going to blow your mind.” He has tailored the snack, to include roasted ham and ‘posh’ cheese, and renamed it the Anglo-French toastie.
Meanwhile chef Heston Blumenthal, already featured his 80s inspired interpretation in season two of Heston’s Feasts, adding a selection of delicious fillings: tomato ketchup, sliced mushrooms, onion and black truffle purée, streaky bacon, Spanish ham, braised pork belly, black truffles and the cheese cooked in white wine and lemon juice.
Speciality restaurants have also been created to reflect the concept such as Grill My Cheese on Leather Lane, who are famous for their carb-fuelled Baby Got Mac toastie filled with mac ‘n’ cheese.
The Melt Room also offer a variety of sandwiches, from the classic grilled cheese to more upmarket fillings such as slow-cooked lamb shoulder with mustard dressed greens.

Gadgets Smadgets
A pressure cooker for the microwave. A spatula that ensures melted chocolate remains at the correct temperature? They may sound fantastical but these items may be next year’s must-have kitchen aids. So says Lakeland – the UK company behind the spiralizer – which recently revealed what could soon be on shop shelves – some are already.
Here’s what you can look out for:

Masha: A rotor-blade powered masher which pushes boiled potatoes through the perforated foot without crushing the starch.
Flare pans: Developed in conjunction with a rocket scientist at Oxford University, the ‘fins’ on the pans channel heat from the flame across the bottom, driving it up the sides of the pan, resulting in even heat distribution.
Doughnut making kit: Silicone moulds which can be filled with traditional doughnut batter or roll out your mix and use the stainless steel cutter to shape the doughnuts before baking.
Magic non-stick liners: PTFE (Polytetrafluoroethylene) coated, non-stick fabric which is heat-resistant up to 260°C, will withstand five years of constant use and can be cut to size.
VegiDrill: The new spiraliser? The VegiDrill cores all kinds of fruit and vegetables, such as courgettes, carrots, onions and aubergines, as well as potatoes, tomatoes and apples. This appears to be already available on eBay, so check it out.
Thermospatula: Designed for recipes that require heating to a specific temperature, the silicone spatula has an integrated digital thermometer that displays a precise temperatures.
Microwave pressure cooker: Cooks meals such as curries, beef stews, and soups in the microwave.
Anti-gravity cake pouring kit: Includes a base plate, two supporting rods and corner piece which clip together and can be combined to support cake extensions at a variety of heights and angles.
Apple Master: Peels, cores and slices apples in seconds and is also great for potatoes.
Poachpods: Promises to make poaching eggs easy.

Pickling goes gourmet
Pickling is super-hot. And the craze has been embraced by chefs and cookery writers alike. Now most London restaurants are offering the likes of pickled samphire, cucumber or kimchi (Korean spiced cabbage) on the side.
So why this obsession? Well, apart from getting a helping of fruit or veg, the process of pickling has health benefits. As soon as you seal fruit or veg in a jar with vinegar, they start anaerobically fermenting. This oxygen-free fermentation is great for our digestive systems.
The microbes responsible for fermentation often create enzymes and vitamins, break down food components that are difficult to digest and make minerals more available for our bodies to assimilate,’ says Alex Lewin, author of Real Food Fermentation.
Eating pickled food with a meal instantly boosts the probiotic content of the rest of the meal. These healthy bacteria help keep fermented food safe and less likely to spoil, and can also help increase the good bacteria in our guts.

Michelin Guide
An exclusive Japanese restaurant which only seats nine people and charges £300
(a staggering R6 000) per person for a meal chosen by its chef has just been awarded two stars in the latest edition of the Michelin Guide in the UK.
The Araki in Mayfair, London, joins 16 other new entries, which also saw 15 UK restaurants awarded their first star. But the legends of the British restaurant scene retained their presence.
Ramsey’s Restaurant Gordon Ramsay kept its three star rating while Dinner by Heston Blumenthal at Mandarin Oriental Hyde Park Hotel, in Knightsbridge, also held on to its two stars. Other three star restaurants are Alain Ducasse at The Dorchester and Waterside Inn, Bray, Berkshire

Cooking the books
Hidden VAT prices and charges for cutlery are among the tactics used by restaurants to con diners, according to a Spanish consumer rights group. Facua has warned customers of underhand tactics used by establishments in a blog post, and launched the #BaresParaNoVolver, or #BarsNotToReturnTo, hashtag to spread the word. Here are some of the more mind-boggling.
Cooking: Diners expect cooking to be part of the cost on the menu, but one Spanish restaurant exposed by Facua charged 30 cents extra for well-done meat.
Bread:  Customers who take from the breadbasket before their dishes are served rightly believe the snack is complimentary – but not always. Sometimes they see the price has been added to the bill.
Ice:  Facua found some restaurants were audacious enough to charge customers for putting ice in drinks, with some charging for each individual cube.
Tap water:  Some frugal customers choose tap water over bottled to avoid being charged for bottled. While it is legal to bill customers for tap water, some bars and restaurants have been caught tricking customers into paying by leaving the price off the menu.
Charging for cutlery  One restaurant flagged up by Facua has been accused of breaking Spanish laws by charging patrons to use cutlery. And as the meal in question included a chicken curry, lasagne and risotta, diners had little choice but to pay.
Charging for the toilet:  The cost of the water used in the bathroom is apparently too much for some restaurants to bear, with charges added to the bill for soap and paper towels.
Vat:  Going against Spanish laws, restaurants have been known to advertise prices on their menus while omitting VAT, meaning the cost of a meal suddenly rises when the bill arrives and it’s too late.

Automated dining:
It’s finally happened. Eatsa, America’s first ever fully automated restaurant opened in   San Francisco. However, if this comes as a surprise, it shouldn’t. Servers commonly use smartphones and tablets to take orders, menu boards have been replaced with smart TV’s, and ordering kiosks replace humans
But Eatsa takes it further. They’ve replaced the entire front end of their restaurant with a streamlined automated process. Customers have no visible interaction with employees.
But they don’t need to! The fresh, healthy food options grab hold of customer’s attention. The basis of all of the simple ‘bowls’ offered is a staple superfood: quinoa! Many variations are offered, and they are all meat-free. As far as the drinks offered by the Silicon Valley restaurant, they only sell healthy alternatives.
Realistically, this idea isn’t all that new; just to Americans. Eat Out  in Germany takes a more fine dining angle on automation, but it’s been a huge success. Japan pioneered this idea years ago with the introduction of  conveyer belt sushi bars and sushi-making robots.
– sourced from the Daily Mail, and internet, September 23, 2015