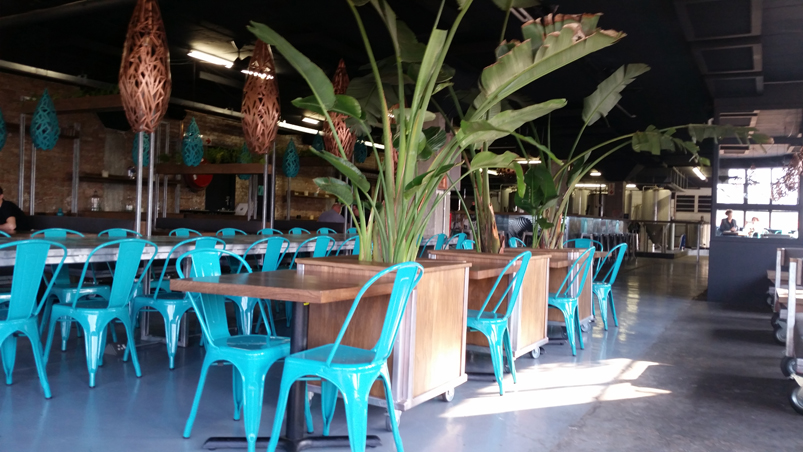 S43, a brewery and restaurant combined is the new tomorrow

INTRO
Once upon a time restaurateurs ran restaurants. Only. If they were particularly successful they opened a second restaurant. If they developed a popular food concept they opened up a chain. Like Nando’s, which was founded in 1987 in Joburg by Portuguese-born audio engineer Fernando Duarte and his friend Robert Brozin. The rest is history and Nando’s is now found in 30 countries.
Fast forward to the present decade. Unemployment is up. The economy is flat. Eating out is a luxury. And few independently-owned eateries are making enough money just serving food
So restaurateurs started adding other attractions. Like bakeries, delis and coffee roasteries. Even retail sections selling apparel, leather goods, books and so on.
Now it looks like breweries in restaurants is the way to go. Like Marcelle and Sean Roberts’ S43.
Although in the case of S43 it’s not clear if it’s a restaurant with its own craft beer brewery or a brewery with a restaurant.
No matter. Around May they moved their brewery from Umbilo road where it outgrew its space and combined it with a new eatery in the super trendy, semi-industrial area, the Station Precinct. Thus S43 (basically its address) and That Brewery were born.
But it’s not alone. The Firkin Hobhouse Micro Brewery and Pub at the Pavilion is already a fixture on the drinking and eating scene. And now it looks as if another well-known restaurateur is going the restaurant/brewery route soon. It makes sound business sense as restaurants make more money from alcohol than food. And artisan beer is the new drink of choice.

THAT LOOK
A stunning and stylish space reflecting the trend to convert industrial buildings into something beautiful. The restaurant/brewery shares space in the Station  precinct with the Saviour Brand company and the Morning Market (Sundays only) and several art studios.
When you walk into the entrance the brewery is on your right and the restaurant on your left. It’s a huge open space divided by a large bar area. Ewok and Xavier Clarisse are the creative minds behind the design concept. You can see Ewok’s quirky artwork around the bar.
The large restaurant area is divided down the middle by wild banana plants, adding a splash of living green to the space. Seating is varied and includes tables and bright turquoise chairs as well as low sofas and coffee tables on castors which can be moved on a whim. Cool.
A bank of  curved windows gives diners a view over a railway line. Not wonderful but this is industrial chic at its most authentic.

THAT FOOD
Simple. Tapas-like starters (salt and pepper calamari) and burgers. Menu is similar to that of their other restaurant, Unity. Consistency is the challenge of new eateries. New chef and new kitchen learning to work together. Our food had some way to go. I opted for chicken wings flavoured with honey, chilli and ginger, R55. Very pleasant, but it could have had more of the ginger and chilli taste. With it I ordered a side salad, which was unremarkable.  Meleney ordered a Mexican-style burger which had very nice flavours and a generous portion of guacamole, R75. Chicken was a little on the chewy side. A small quibble. The next week the son-in-law had the same burger and raved about the chicken. Seems they have changed their supplier. A winner was the chunky potato wedges.
A big disappointment were the desserts, My mini donuts were raw on the inside. When I complained they took them back and clearly popped them back into the oil. The result was they were dense and chewy on the inside, dark on the outside. Meleney ordered a waffle (limp) with salted caramel ice-cream (divine), R45. They didn’t charge for the donuts.

THAT BEER
Craft beer selection includes That Blonde (we loved), That Food Adwiss (haha), That Irish Red and That APA.

THAT SERVICE
A little distracted but charming. Mostly sweet-faced young men with floppy hair you want to brush off their faces. Best not to touch, though. Leave it to their mums.

SUMMING UP
Great concept and great space. Ideal venue to chill away lazy Saturday afternoons or meet up with friends in the evening. Will definitely return. I’m hearing better reports of the food so it seems they got the consistency right – and we loved the vibe.

LOO REVIEW
Gosh. So desirable to visit. On the narrow side though. Painted a bright turquoise with  artworks on one side and a ” plaque” explaining the design concept. Something to read while on the throne. – Ingrid Shevlin, July 2015