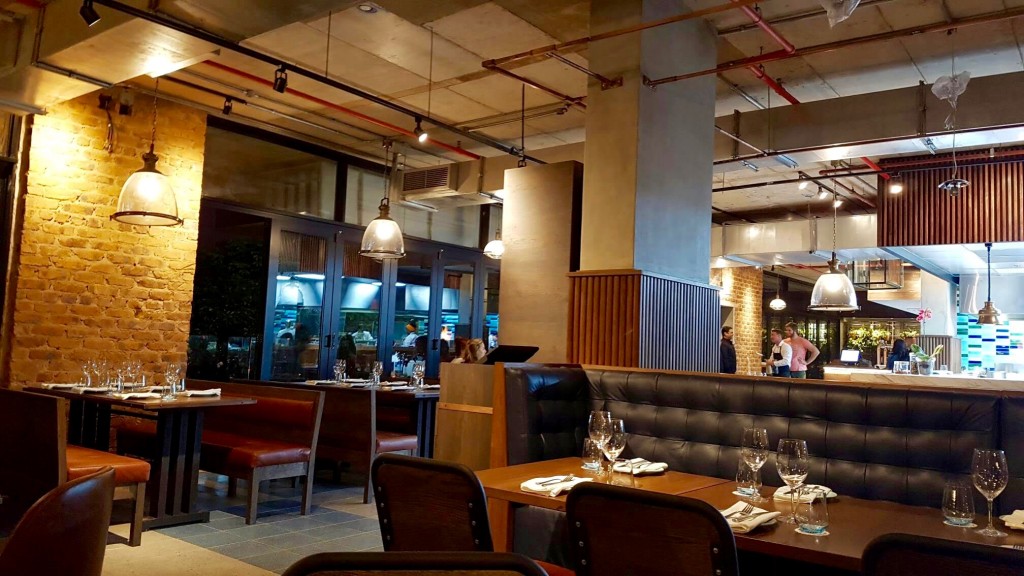 Designer-designed interior of The Chefs’ Table

The sophisticated new Umhlanga eatery, The Chefs’ Table, see itself as everyman’s restaurant. It’s not. Thankfully. Because it’s something much more special, writes Ingrid Shevlin

Soti Sonatas is either a brave or foolish man. Or both. Time will tell.
He’s the hands-on part-owner of  Chefs’ Table, and a man who can boast a wealth of hospitality experience. Think Circus Circus.
Firstly, he’s opened a huge new restaurant ( at least a 140-seater)  in Chartwell Drive, which must have more restaurants per square kilometre than Amsterdam has brothels in their Red Light district (a not too disparate a comparison considering both sell pleasure for money).
Secondly, he opened a fine dining restaurant when the average Durban diner’s tastes still runs to steak and chips. Although, to be fair, Soti doesn’t call it fine dining. But judge for yourself from this description of their Parmesan gnocchi: “gourmet Greek smoked feta, broccoli, macadamia granola, bone marrow, thyme Parmesan crips, rocket emulsion, asparagus and truffle cream” And this does not even take into count the culinary dust, jellies and smudges and purees which are several incarnations beyond the original vegetable they once were.
Fine food was perhaps the closest description he would accept when Meleney Cunniff, my Shrewd Food partner, and I chatted to him on Tuesday (August 16). This was the night we were lucky enough to snag an invite to dine.
Essentially, though, he prefers to describe his food as fresh, local and seasonal – and authentic.
Not that there is anything new here. Any restaurateur worth his environmentally-friendly street cred is going that route to reduce his carbon footprint, blah, blah, blah.
Thirdly, he employed a head chef who is only 24 years old. Her name is Kayla-Ann, Osborn. Then he put her in charge of 13 other chefs, all qualified, and who all look older.
Lastly, he opened his doors for well over a week to food bloggers, food writers, foodies, restaurateurs, family and friends (I’m assuming the last two) and invited them to sample his menu and give him feedback. Oh, and nobody had to pay anything. It was for free.
Foodies were agog over his bravery/confidence, while restaurateurs have been shaking their heads in amazement and bemusement. “He must have an awful lot of money” murmered  one. “He’s crazy”,  said another.
The upshot of all this – and this may have been Soti’s aim all along – is that everybody, and I mean everybody,  is talking about The Chefs’ Table, which opened  formerly today (August 19), which is when diners have to start handing over money for the privilege of dining there. 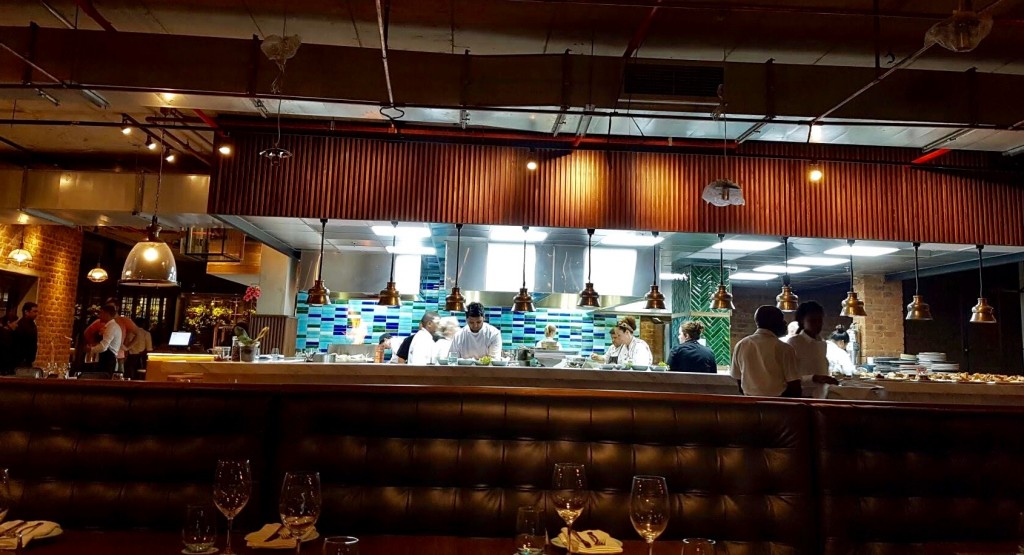 The heart of the restaurant, the open plan kitchen

THE DECOR
The decor is stylish, sophisticated and eclectic and features wood and other natural and textured materials.  Overall, I thought it was a little too “brown”, but there are lifting colours. Chairs are very comfortable and the lighting is superb. And, in case you care, the crockery is handcrafted and ceramic.
The restaurant has it’s own private dining room and an open plan kitchen which is at the heart of  it all. It’s apparently to help the chefs feel connected to the diners and vice versa. At two corners of the kitchen counter is  two chefs’ tables for, I presme, special and intimate food events. If you want to feel connected to the chefs that’s the place to sit. You can practically see up their nostrils. 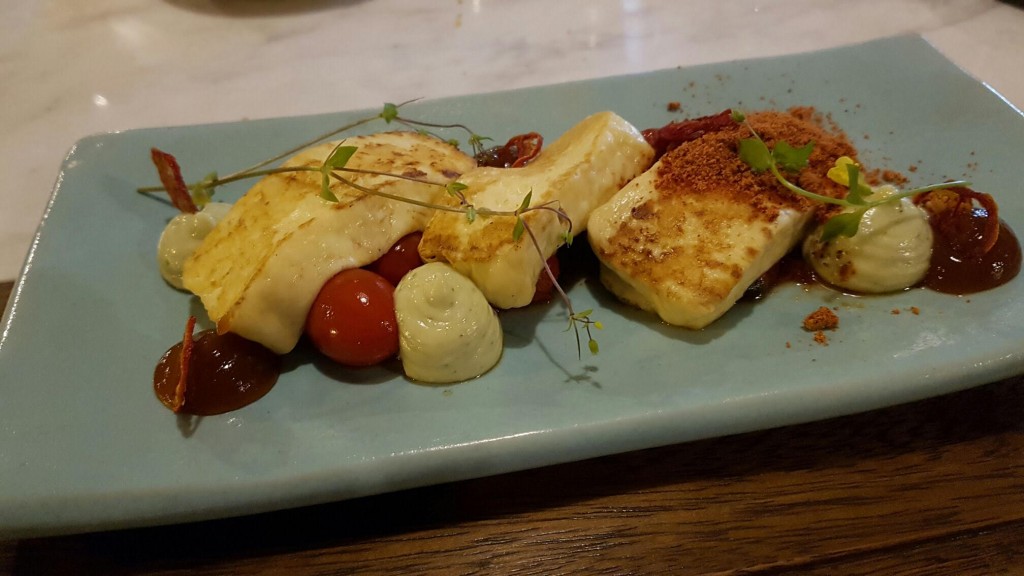 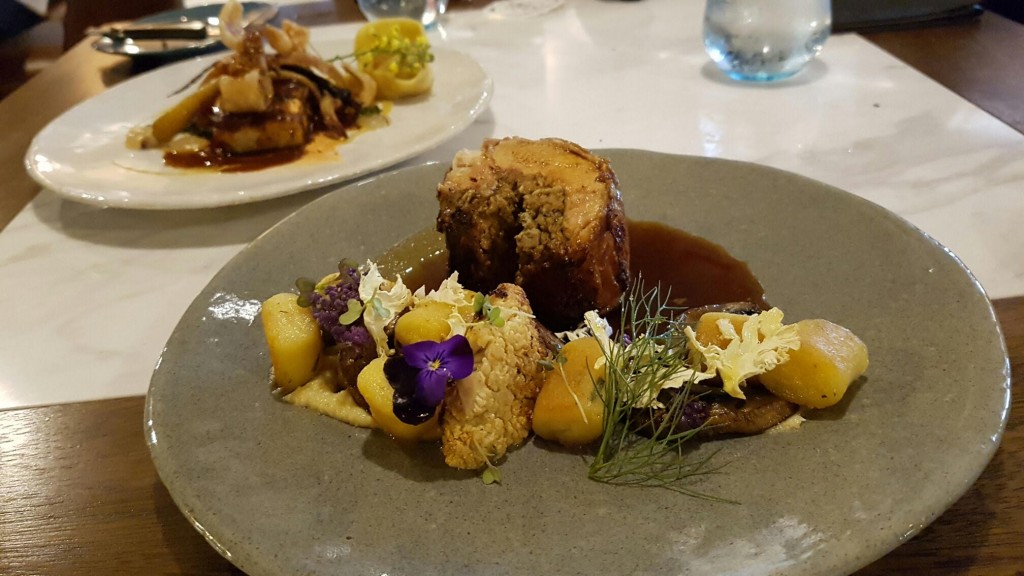 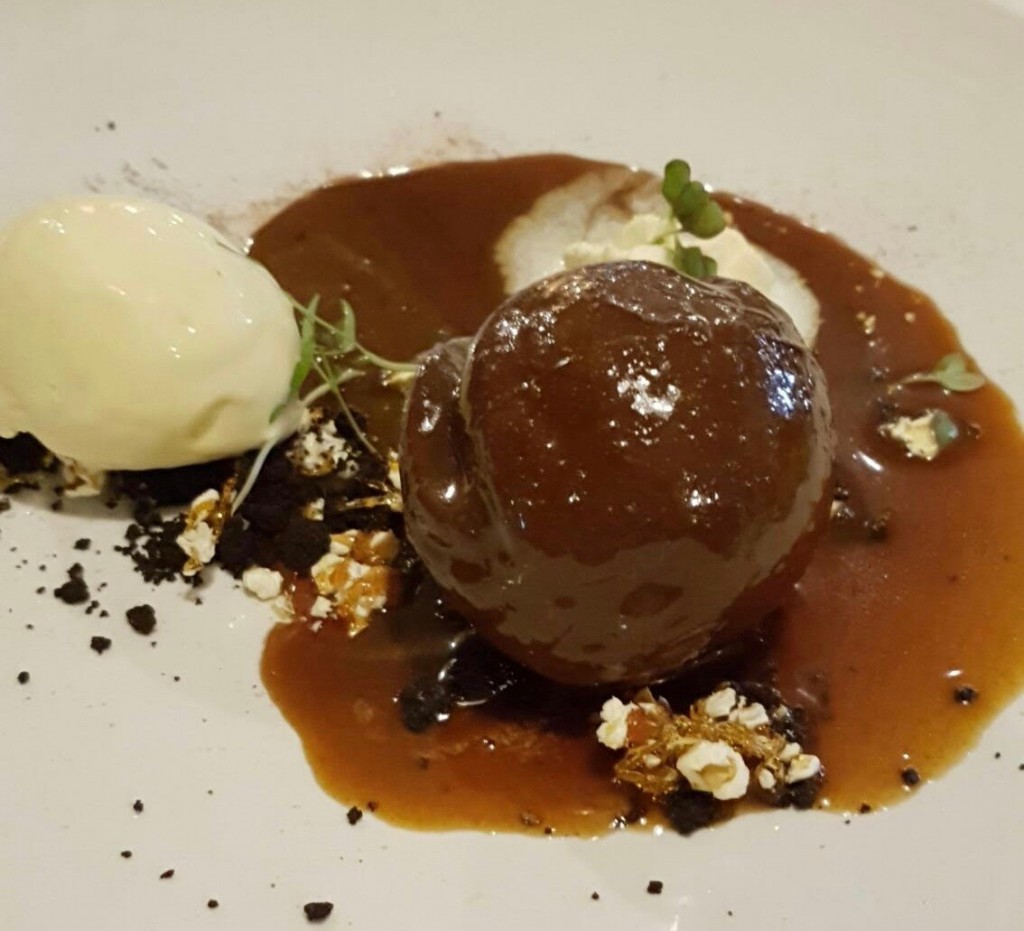 THE FOOD
It’s a most intriguing menu I’ve seen in a long time and I think it will appeal to those who like to be excited about food and happy take a chance on the outcome if there’s a promise of something special. Our experience? There was a lot going on with the food. Sometimes it worked. And sometimes it didn’t.
Kayla-Ann may be young, but it’s clear she’s a very innovative cook. As far as I’m concerned, it’s far better to take a chance than play it safe – so hats off to her. In the five or so minutes we interacted with her, she impressed with her enthusiasm and her willingness to listen to criticism.
The small menu changes regularly (remember fresh, seasonal and local) and there may be changes even daily.
We started with a selection of artinisal breads served with herb butter and potato salt, all delicious
For starters we chose: winter caprese salad with roasted cherry tomatoes, grilled gourmet Greek haloumi, coriander emulsion and tomato gel (R79); fresh mussel and crispy geelbek served with coriander and lemongrass cream, chilli praline and citrus ricotta bon bon, R85; and roast pumpkin tortelli served with bacon cream, bacon biltong and bacon powder, R85.
The best starter was the caprese salad which had such a wonderful mix of  flavours and textures I was nearly blown away.
The crispy geelbek was less exciting with the flavours confused rather than complementary. It also lacked any seasoning. The tortelli was pleasant enough.
For mains you can order beef fillet; lamb chop rillettes; smoked Norwegian salmon and a duck confit and breast duo.
I opted for the free range, deboned baby chicken (R169)  which came with a mushroom farce (a way of cooking mushrooms), tarragon gnocchi, textures of cauliflower, garlic emulsion, baby basil and mushroom jus. This did not work for me at all. It had a too-intense and somewhat bitter flavour. And the chicken, which was rolled, stuffed and then sliced, was dry.
Meleney hit the jackpot with her confit pork belly (R179), which was served with curried apple puree, apple gel, carrot tortellini, carrot and ginger reduction, crackling, baby carrot, carrot dust and fried coriander (whew!). It was sublime and the pork literally melted in the mouth.
Our desserts were as sublime. A  blue cheese plater which transformed the cheese  in such forms as ice-cream, along with preserves;  chocolate and popcorn  which had chocolate balls filled with a cream so delicious I thought I had died and gone to confectionary heaven; and a lemon posset with tiny meringues and other creams.   What a superb end to our meal.

TO SUM UP
Service was excellent and staff very friendly. I can only wish them all the best.