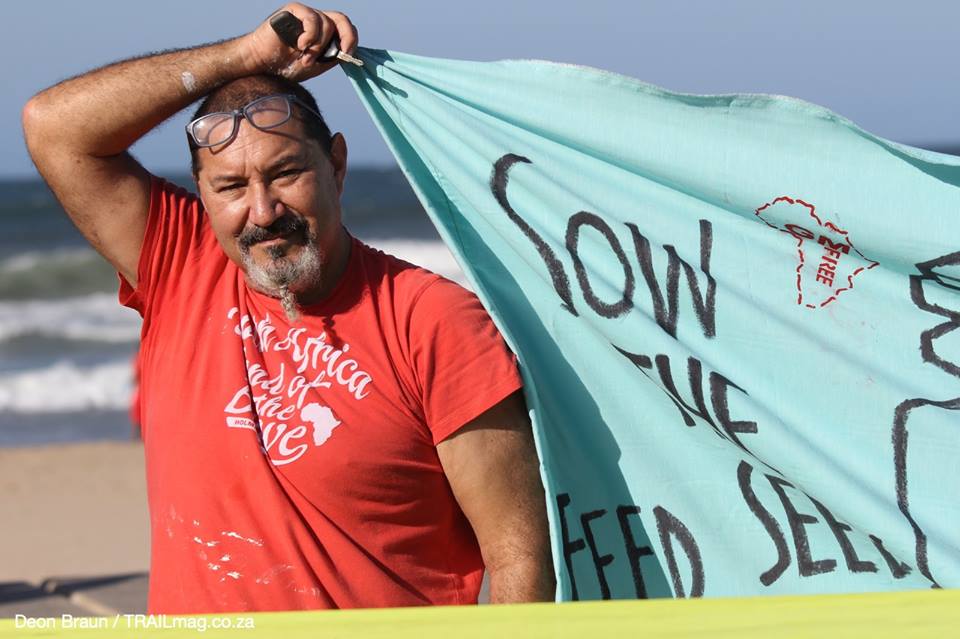 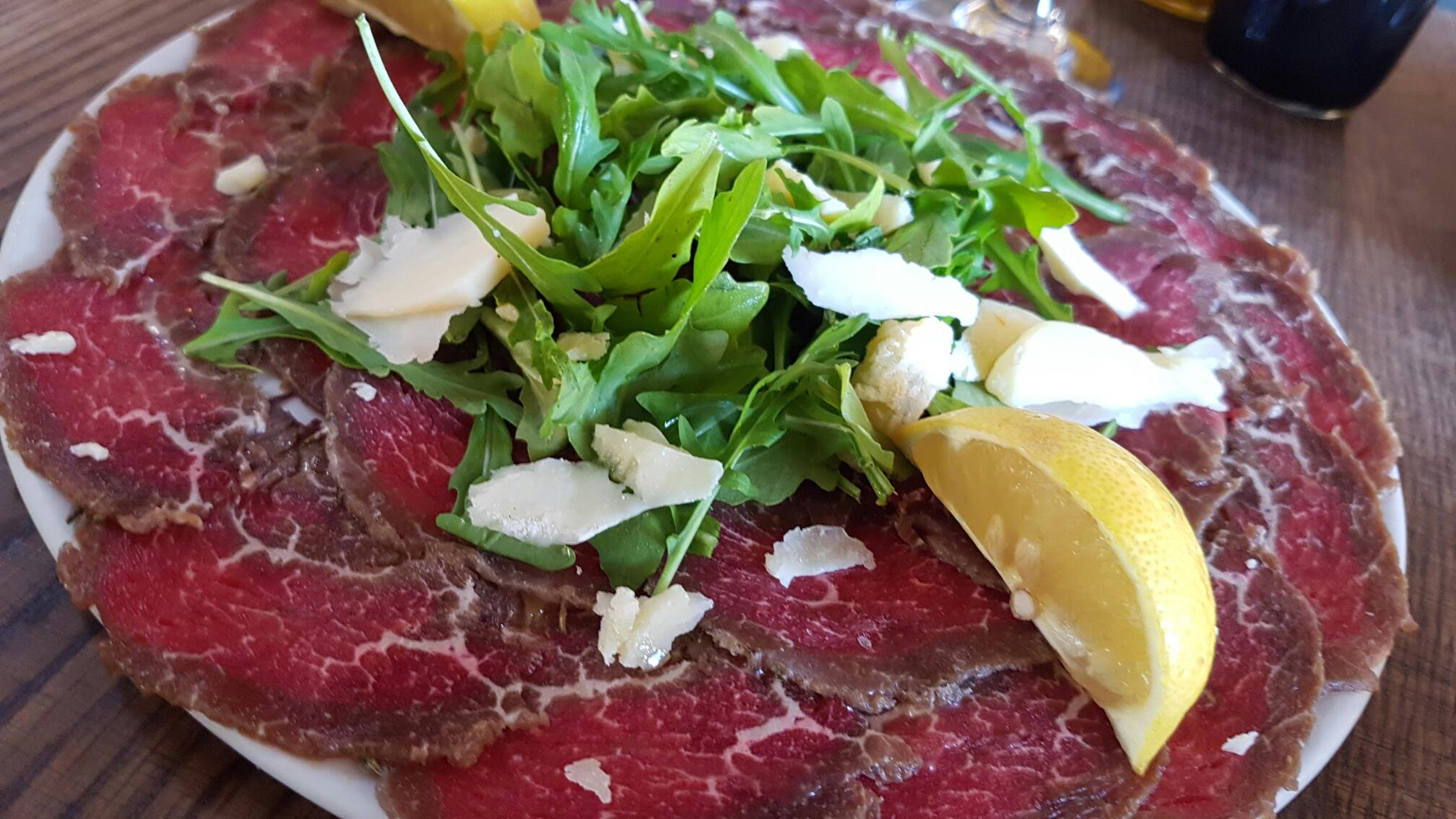 Charcuterie, the art of curing meat. It also includes sausages, pates and terrines.

Despite vowing never to open another restaurant, Marco Nico is doing just that, reports  Ingrid Shevlin.

Marco Nico is a man of many causes. And they vary wildly from the evils of genetically modified crops and the killing of whales to why Jacob Zuma should go – but not until he’s paid back the taxpayer for the improvements to Nkandla.
He’s an odd blend of reactionary, anarchist and missionary and has the zeal of all three in his attempt to change us and the world we live in – for the better. And he wields his Facebook page as a weapon to fight his myriad causes.
For instance:
He’s anti-GMO
Anti-pesticides in farming
Anti chemicals in processed food
Anti battery farming
Anti big corporations motivated by greed
Anti unnecessary waste.
Anti anything fake
Naturally then, he’s pro organic food, local food producers, foraged food, a low carbon footprint, good animal husbandary, slow food and celebrating the delights of East Coast produce and food.
Many of these beliefs come to together in Thirteen: East Coast Eatery, the new restaurant he’s is opening at 275 Florida road around mid-July. Right now the premises are being revamped, repainted and redecorated. 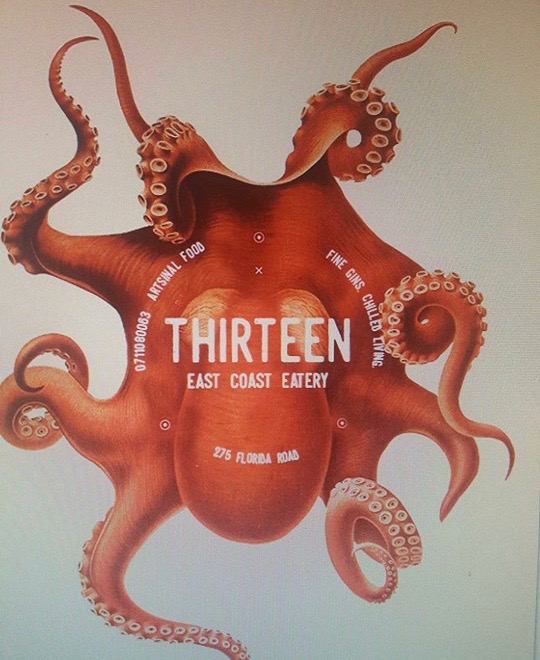 It’s called Thirteen because that number has figured positively in his life. The numbers of his birth date total 13; the letters of one son’s name totals 13, the number of the title deeds to the family farm add up to 13 .. and so it goes on.
“For some reason the number 13 has featured throughout my life. I don’t know why, but 13 is lucky for me,” he explains over excellent coffee at Mark Gold.
Less clear is the reason for the octopus, which has insinuated itself into the restaurant’s logo. It’s a family thing. Reflecting memories of his time with his dad. Let’s leave it at that.
Marco Nico has opened many resaurants. All were successes. He has the midas touch.
But after Listoria he vowed never, never again. Among his concerns was the unfriendly-to-family life demands of a restaurant. And he has two sons, one still a preteen.
So after Listoria closed he started a charcuterie operation – using only natural curing methods of course – and restaurant consulting work. But getting paid for consulting proved challenging.
“In fact, he says, “It’s easier to be running this kind of restaurant (Thirteen) where I won’t have to be in attendance all the time than trying to get paid. It’s what I know. It’s my comfort zone. And with Thirteen  it’s a different ethos.”
Meaning that this time he will get to have a semblance of a normal family time with his beloved sons.
But Thirteen will be little different from his predominately Italian-inspired previous eateries. It will focus on  his charcuterie operation – finding a showcase for it rather than selling the cured meats to restaurants and hotels.
So it will have a range of charcuterie as well as a mix of other deli/tapas style items like hummus, olives, pickles, artichokes, salads with a twist – using foraged food, like purslane and nettles (common weeds), and morogo (indigenous spinach). Foraged food is a passion. Especially from the sea and seaweed.
And, despite the charcuterie element, he insists the food will be 60% vegetable-based. He’s even planning on establishing an organic vegetable and herb garden on the restaurant’s roof to help make that happen.
The food will be inspired by the cuisines of the Mediteranean, Middle East, Latin America and, of course, East Coast.
It will include pastas, risottos, as well as the likes of Italian meatball bunnies drizzled with truffle oil and shaved parmesan. He is even going to make his own bread for his ¼ bunnies – using non-GMO flour of course.
“I want people to play with the food, like the bunnies. Pick and choose what they want” he explains
He describes his food as easy to order, and food you can eat in, or take out.
Basically, the deli stuff will be prepared each morning and ordered from the deli counter. The food will  be brought to customers. But there will also be fresh seafood and steaks and other fresh meat, which will be cooked to order.
A gin bar will serve, yes, gins, as well as other drinks, and a section of the restaurant will be devoted to a range of bottled deli items, made in-house, to buy.
He’ll be buying direct from the farmer and eliminating the middleman. “From farmer to customer” is how he puts it. “I will also eliminate processed food by making everything myself.”
The deli food will be sourced from local suppliers.
“KZN’s beef is fantastic as is KZN pork.’
He gets very animatated when he talks about KZN’s diverse cultural melting pot.“We are fortunate to have one of the biggest Indian populations outside India and access to their spices. Our proximity to Mozambique means we have access to their cuisine. Our Zulu food is delicious when cooked properly. Chakalaka is classically Zulu. To get goats meat you only have to go to the Victoria Street Market.”
He also talked about how Chinese shops in Durban give us access to amazing and different vegetables. And the cuisines of North African countries, which are adding to our melting pot.
Of Italian extraction Marco was born and grew up in Joburg. He has lovely, warm memories of the family hotel in Braamfontein where he spent much of his childhood under the loving care of his grandparents and extended family. Food was one of the glues that held the family together. He also talks warmly of the family farm, his childhood home.
But now he’s as Durban as chakalaka, as Durban curries and as our Indian Ocean. And Thirteen will be the first of his restaurants to truly reflect his love of, and loyalty to, the East Coast.