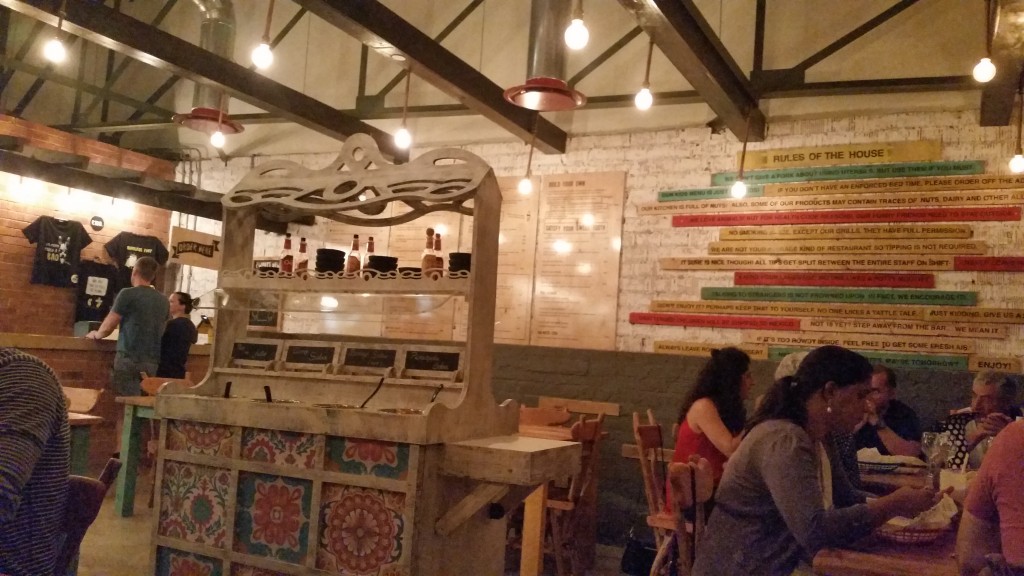 Fun and funky interior of FOUR15. The salsa wagon is in the foreground.

I’m baffled. Why spend a shitload of money creating a fun and funky eating space and then serve mediocre faux Mexican food. Okay, so I’m no expert in this Latin American cuisine – and I’m relieved it’s not another chicken  franchise  – but I doubt they sell burritos in Mexico with boerewors as the starring ingredient. Or a Thai version with peanut sauce or one with ratatouille.
But a clue to the thinking behind FOUR15  is found on their menu which declares their food is inspired by the Mission District in San Francisco… which is characterised by its “mixed cultures, global food trends, social awareness and its celebration of Mexican heritage”.
So it’s Mexican food with global influences with some random ingredients like boerewors to make us feel  the love.
But the remark by one of the waitresses that they have been crazy busy since they opened a month ago says it best. It says the average diner is just happy to be eating something different in a viby eatery with their amigos and is not particularly demanding, culinary-wise. And that’s fair enough.
Perhaps more worrying, though, is the other declaration on the menu…… “we don’t pretend to be perfect…”
Yea, but shouldn’t you be at least trying.
But there are some positives at FOUR15, apparently South Africa’s first and only burrito bar.

THE LOOK
Whoever designed the interior of FOUR15 Culture is a genius. It’s such a great space with lots of fun elements. The feel is warehouse chic with high, arched ceilings, exposed beams, brick walls and cement flooring. One wall is covered with graffiti art by Saun Oakley, while another has a long list entitled Rules of the House, which are fun and informative. Table, chairs and other furniture items are made from reclaimed wood or recycled material. So they have their green credentials sorted out.
FOUR15 is self service. You place your order with the man behind the till and barely minutes later it plops  on your table on a sheet of paper in a basket.  At first we didn’t know the self-service rule (nobody told us) and wondered why no one was taking our food order. It was the son-in-law who noticed it was part of Rules of the House, along with “our kitchen is full of nuts”  … and you don’t have to tip if you don’t want to, but it would be nice if you did.

TO THE FOOD
Mexican I supose. Under tastebud ticklers you can opt for chicken chilli; chips and guacamole; and chips and salsa. Burrito bowls are basically salads with beans and cheese and a protein topping of choice (steak, chicken, tofu). There is also a Cajun-lime shrimp version for R64.
Cheese is in pretty much everything so if you’re lactose intolerant you’re in the wrong place.
Quesadillas, folded and toasted tortillas, come with mixed cheeses, spring onions and a choice of steak, chicken or tofu. Or you can opt for the Cajun-lime spiced shrimp version with avocado, cilantro and so on. From R60 to R65
The largest section is burritos, which are filled tortillas. There are 14 fillings. All burritos come with a side of sour cream and unlimited access to salsa options from the salsa wagon. Prices range from R69 to R78.
Options include the carnitas, which is shredded pork, cilantro, lime rice, black beans, pico de gallo, cream and cheese, R68. Or the wok on the beach; roasted red peppers, onions, rice, carrots, broccoli, bean sprouts, teriyaki sauce cheese and choice of grilled filling (meat I presume).
Strangely they don’t serve nachos.
We started by sharing tortilla chips served with guacamole, warm picante cheese dip and salsa, R68, which was satisfying. Cheese sauce had a nice tang.
The daughter’s main was quesadillas with a chicken filling, R60. A little bland but spicy salsas from the wagon helped. It was nicely crispy, unlike my burrito, a Mission original with chicken, R68. Other ingredients were cilantro and lime rice, pico de gallo (tomato, onion, jalapeño salsa), sour cream, cheese and guacamole, which was tightly wrapped in aluminium foil and served warm. It was an unappealingly mush with no discernible flavours or textures. It was not unpleasant flavour-wise. But why strangle it in tinfoil?
The son-in-law ordered the chipotle BBQ burrito with green peppers, onions, carrots, cheese, rice, beans, chipotle BBQ sauce and steak, R75. He said the ingredients were overwhelmed by the BBQ flavour and he  couldn’t taste anything else. He, too, did not enjoy the mushed texture.
And it didn’t get better. We shared a flan napolitano, R30 which is a creamy custard baked in a layer of caramel. It was so thick and gluey in texture we couldn’t eat it.  The tri-colur sorbet, R30 was pleasant but it was hard to detect distinct flavours. Other options include a creamy rice pudding and churros.

SUMMING UP
Best parts of FOUR15 were the decor and the toasted coconut shake, R25, and a mint margarita. Both were delicious. And the two waitress we spoke to at the end of the meal when the restaurant was empty. They were charming, whacky and witty. Trouble is, the only interaction we had with them before then is when they cleared the table.  Two assets not being utilised.
Part of  FOUR15’s  website is devoted to Mexican lingo. Thanks to that I can say, “Hola amigos (hombres and mujeres) this is adios forever”. – Ingrid Shevlin, October 21, 2015