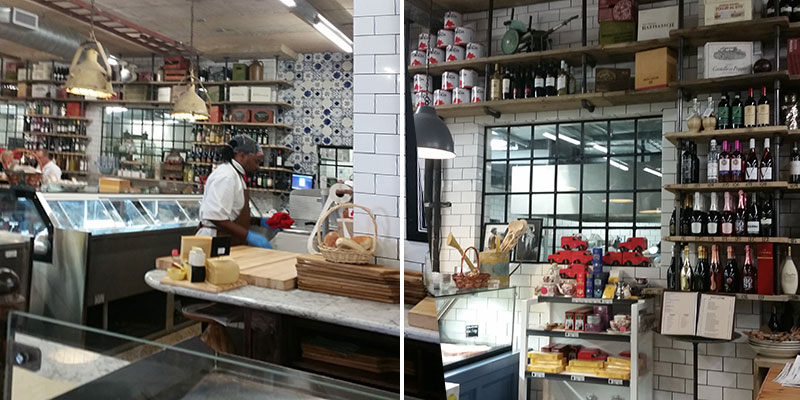 THE INTRO
Old Town Italy is a new cafe/deli/speciality grocery store in Umhlanga Rocks which is the brainchild of the clever Remo’s team. An odd name for a one-stop food store I thought at first. Even odder is its location on Meridian Drive, at the edge of Gateway’s business precinct, which is hardly on anyone’s way home. In fact on anyone’s way anywhere.

So, if it’s all about location, location, location is this a good one for this kind of food concept?
Yes, as it turns out, thanks to speciality stores like Duke & itDuchess, a coffee/motorcycle/clothing shop in Meridian Drive, which has been drawing in the multitudes for over a year. The attraction is both the excellent coffee and food. And motorcycles, too, I presume
So Meridian Drive has become something of an unlikely shopping hot spot.
More proof of the wisdom of Remo’s decision to locate Old Town in Meridian Drive is that it has been packing them in since it opened six or so weeks ago, with foodies happily queuing for a table, or to buy Italian deli items to take home. Already plans are far advanced for a similar concept in Joburg.
There is also good reason for it’s name which is designed to recreate a return to the old ways as Remo’s puts it. This was a time when food shopping was a personal experience. A housewife would stop off at her butcher, then the cheesemaker, then the grocery story and so on. All the storekeepers would know her name and her preferences.
So, a return to personal and specialized shopping as opposed to soulless supermarkets.

THE LOOK
In keeping with this ethos, Old Town is divided into sections for fruit and veggies, a grocery section where you can buy a range of items from Italian biscuits to olive oil, cheeses, an artisanal bakery, a salumi for cold meats, a deli, a patisserie and a butchery for artisanal cuts. Also in the mix is a rotisserie, a wood burning oven for pizzas and a section for Italian wine and beer
And yes there is an olde worlde feel to the way the shop’s interior has been designed, from the brick walls and mix and match tiles to its high counters manned by friendly faces.
But, in truth Old town is more an idealized version of the old ways. It doesn’t really feel like there’s an plump Italian mamma in the kitchen. More like an accountant.
As Frank Chemaly, a fellow food writer succinctly put it, Old town Italy is more head than heart.
Portion control rules it seems as the portions are small and everything is served without adornment. No fuss food. No stray parsley to add a splash of green. And the food is on the pricey side considering the portion sizes. In fact everything is on the pricey side, particularly as most of the alcohol is imported.
And there’s no deviation from the menu. At all.
The seating and eating options are varied. There are high tables and stools – very uncomfortable – and a bar area where you can sit and order sandwiches made with flatbread or cold-pressed fruit and veggie juices. There is more conventional seating near the window while outdoor seating is more high tables and stools.

TO THE FOOD
The menu is a little difficult navigate. but basically it’s divided into sections like pepperoni, carpaccio, cheeses, fritti, prosciutto, with options under each heading from which you can order items to make up your own antipasto selection.
In addition there is pasta section with the likes of gnocchi with a gorgonzola sauce, tagliatelle with mushrooms, lasagne, spaghetti with seafood and pappardelle bolognese. There’s also melanzane, beef burger and flatbread sandwiches.
The first time I went was on a Saturday and Old Town was pumping. I was with a friend called Anita, a foodie and savvy consumer.
She ordered the melanzane which was served unadorned on a white serving plate. It was a small portion for R90 and looked as if it had languished in a warmer drawer for too long. But looks, in this case, can be deceiving, as she described it as delicious.
I ordered the seafood spaghetti, which came with four prawns and calamari. Small portion for R120 but also delicious. So this was a success.
For dessert we ordered from the patisserie: She a tartlet of some kind and I a pecan tart which was so chewy it was a challenge to my chewing skills, R40. Better to have served it warm, I think.
The next day I returned with the daughter and son-in-law who were determined to experience Old Town for themselves.
This time not as good an experience..
I ordered a flatbread sandwich with chicken, sundried tomatoes, fontina cheese in a mayonnaise sauce, which was pleasant but unremarkable, R70
The daughter ordered penne pasta with an arrabiata sauce and gave a similar verdict. R60
The son-in-law opted for a quarter chicken served with Portuguese like sauce and declared it was dry. R70, which included side salad.
Again modest portions.
I ordered an Italian soft drink, baladin spuma nera, made from rhubarb and orange zest . It tasted like medicine but at R35 I finished it.
The son-in-law also ordered a soft drink, lurisia gazzos made with lemons, R37, and didn’t like it much either.
For dessert we went the Italian ice-cream route which was a good choice.

THE SERVICE
The staff were quite delightful and helpful and mostly knowledgeable.

SUMMING UP
I think the son-in-law summed it up best by saying Old Town offers a good holistic food experience rather than an exciting culinary adventure. But it’s fun and vibey and we would go again. I did buy some very good cheese there from the cheese counter. A bit pricey but no more than you would pay at a food market.

LOO REVIEW
I could see only two toilets and since Old Town is so big I would have thought more toilets would have been sense.  The one I used was spacious and nicely appointed. In keeping with its ethos, it had an old-style cistern with a chain. I don’t know if it was just that one day but the chain could not be pulled. Instead the water ran continuously. Not exactly conservation-friendly.