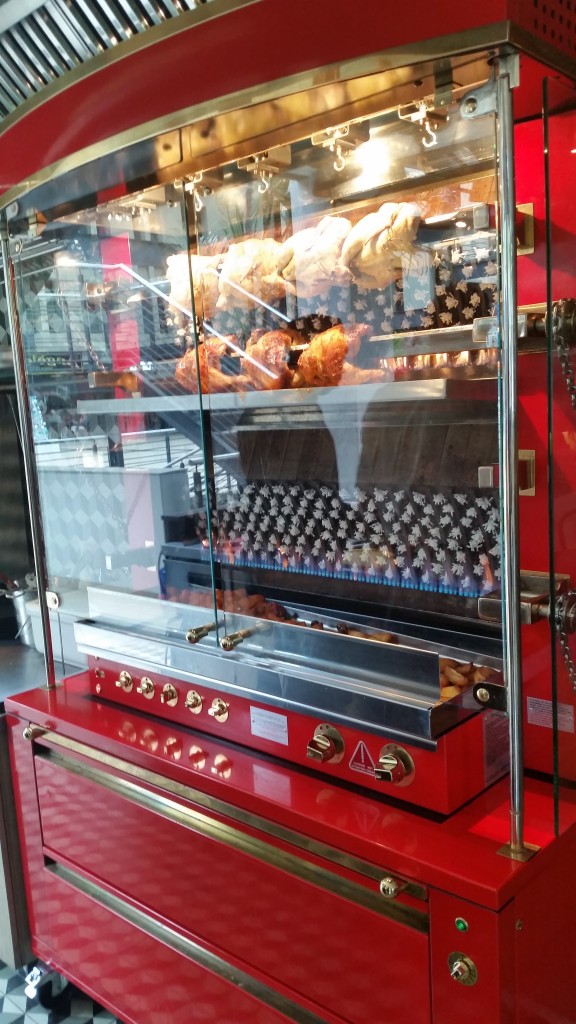 It’s new, it’s in Umhlanga, it has been open for only a week or two and it’s already packing them in. It’s Pintxada. Yay. by Ingrid Shevlin

It’s rare that rotisserie chicken is the star of any menu. I mean, rotisserie chicken. But it’s what everyone suggests you order at Pintxada – pronounced pinchada apparently. By everyone I mean food critic Frank Chemaly.
As it happened he was already at Pintxada when Megan Harker and I arrived for Sunday lunch. “Have the rosisserie chicken”, he enthused when he spotted us. “It’s fantastic.”
He’d been to Pintxada before and had already reviewed it. Now he was back for more. He was that enamoured.
I was less enamoured at the end of my meal, but enjoyed it enough to want to return. I had some orgasmic moments, some head-blowing moments and some disappointing moments. Like life I suppose.

Pintxada is Martin Lombard’s newest baby. He also has Havana in Suncoast and Little Havana above Pintxada.  He has decades of experience in the industry and can probably open a new restaurant in his sleep. But he says Pintxada is his last restaurant. But who knows.

THE LOOK
It’s an amazing space. And big, with a more intimate corner area, a large bar and an open terrace. Decor is eclectic, lighting is interesting and the checked flooring amazing. Bentwood chairs are cool, too.

TO THE FOOD
I asked Martin if the food was Spanish inspired. He said no, it was South African.  So I’m puzzled. That aside, the menu is small but changes regularly. That way Martin can get a taste of what diners are enjoying or not enjoying. Inevitably, this means you might have a different experience each time. But the chicken is his menu’s mainstay.
Martin restored the large red chicken rotisserie. It’s  his pride and joy and while the menu might change the rotisserie and chicken are not going anywhere.
The menu on the day we were there offered 18 tapas options, five mains and four desserts.
Tapas section included saffron and mussel bisque;  pig’s head with jalapeño relish and toast; finely sliced sirloin with horseradish and curry salt; pork belly with lentils and bacon; croquetas “Red Madrid” style; and ribs with sweetcorn, orange and gremolata. They were all so enticing, apart from the pig’s head, it was hard to choose.
In the end Megan opted for chargrilled Spanish vegetables with yoghurt, R35 which was disappointing. The veggies looked limp and sullen.
I ordered the Portuguese style sautéed gambas (shrimps) with garlic and chilli, R70. It should have been Chilli with a capital “C” because the Chilli nearly blew the top of my head off. In fact my throat felt as if it had suffered burn damage. Underneath the Chilli, it was all very delicious. My throat might tell you a different story, though.
Megan had the rotisserie chicken, R120, for her main. It was fabulous. I don’t think I’ve tasted chicken that good. It was served with vegetables which were cooked underneath the chicken, which had benefitted from all that lovely, dripping chicken juice. They were  great and the potato wedges perfect.
I opted for dorado, a linefish, grilled in the charcoal oven and served with French fries and a kind of salsa sauce. The flavouring was great, the fries perfect, but, sadly, the dorado was overcooked and on the dry side. Sigh.
Other main options were the aged entrecote,  a Norwegian salmon for R180 and a chalmar  fillet for two, R220. Chalmar is a special kind of beef.
For desserts we opted for the Catalunya brûlée, which was sublime, R35 and lemon posset, with shortbread, R35. Posset is a creamy dessert flavoured with lemons and is usually served with shortbread. The posset was divine, the shortbread was notable only by its complete absence.
Bill came to R515.

SERVICE AND VIBE
Service was generally good and the vibe great.

LOO REVIEW
No loos at Pintxada. So you have to use the public loos in the centre, which were just passable. 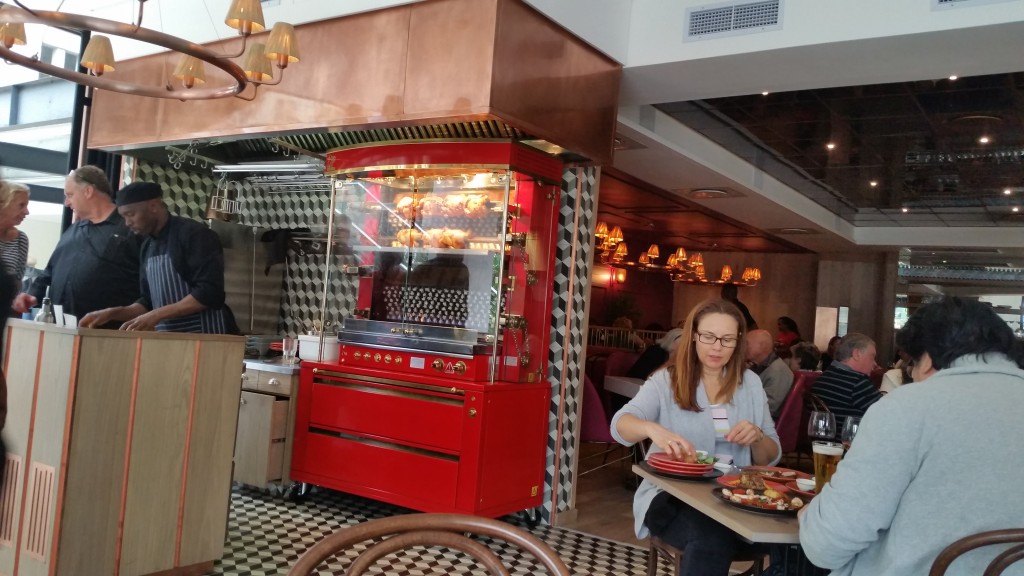 Pintxada with Martin Lombard on the far left