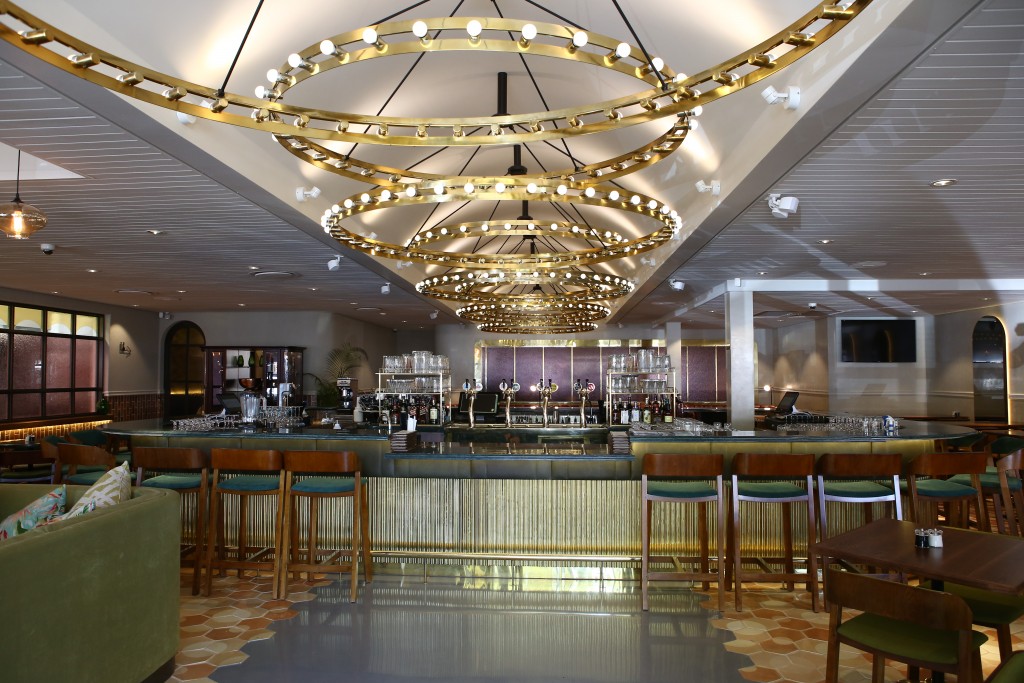 Despite its pretentious name, 14 on Chartwell is a viby and welcoming eatery serving good food, writes Ingrid Shevlin

While the daughter’s palate is a sophisticated one she retains a childhood fixation on a certain Spur meal, a 200g rump steak, served on a piping hot skillet, with chips, all of which she drenches in Spur sauces. It was on a rare visit to Spur with her, rare for me that is, that I discovered their chicken wings served with a blue cheese dipping sauce, and was immediately smitten. I’ve tried many other versions at many other restaurants but Spur’s wings, the last word in comfort food, beat them all. Until now.
14 on Chartwell serve chicken wings basted in a Sriracha honey sauce with their version of a blue cheese dipping sauce. Their chicken wings are particularly plump and succulent and the sauce sweet, but not too sweet, with a hot and spicy overtone. Delicious. Like the dipping sauce. So now they taken my no 1 chicken wings spot.
This new Umhlanga restaurant is full of surprises. Initially I never held out much hope for a new and super trendy venue designed to attract the young, restless and fickle with its wide selection of craft beers, cocktails and small batch spirits.
But clearly some careful thought has gone into the menu, sophisticated-cafe in style, and its execution to achieve a winning combination.

THE LOOK
Super stylish with a mix of decor styles and mediums, like fabric, leather, wood and metal with screeded walls. Obviously, as you can see from the picture, the bar dominates. And although the room is large enough to be in danger of feeling cavernous, a variety of seating options mitigates that by creating different and intimate areas of seating. Along with the usual tables and chairs there is also, for instance, couches with low tables and high tables along one wall with bar stools.  You can also eat at the bar. I’ve never been to New York, but it feels like New York chic. 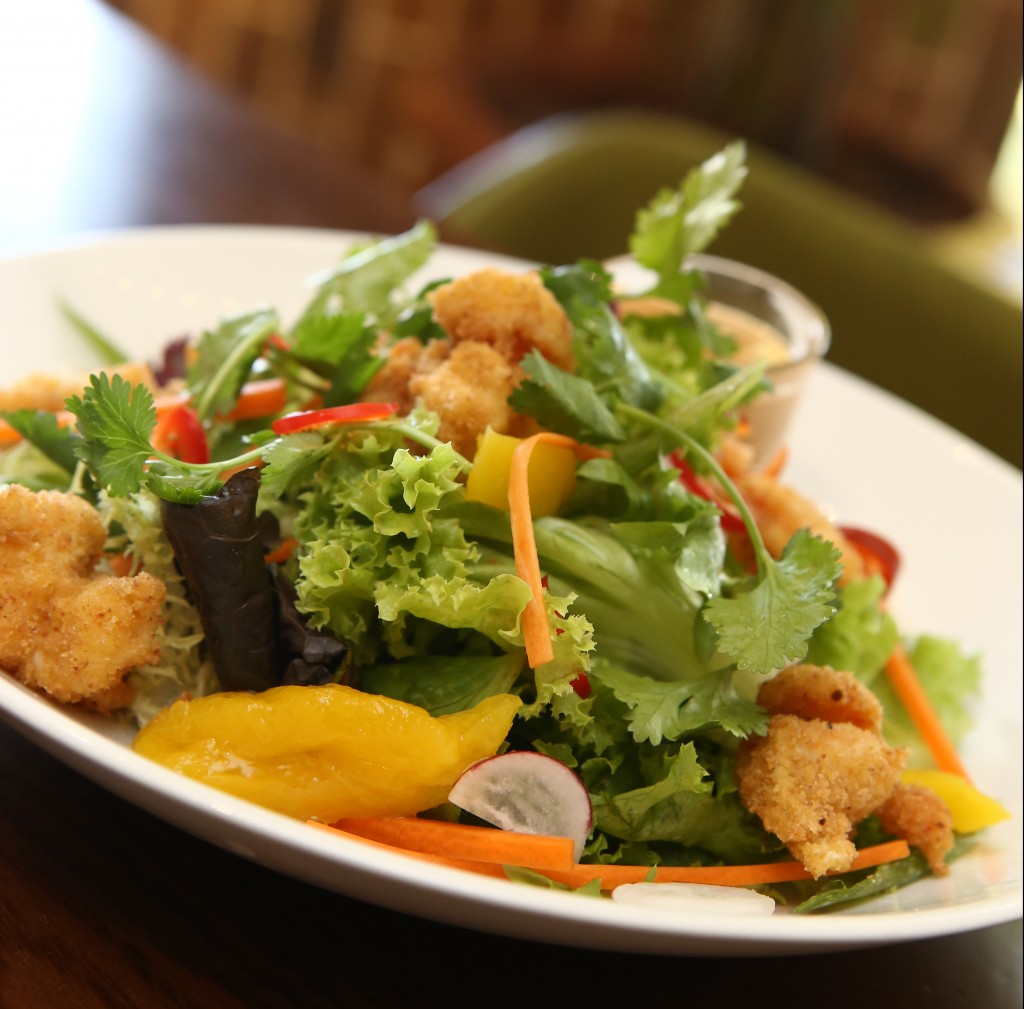 The crusted prawn and mango salad

TO THE FOOD
Smallish menu but varied enough to please all palates, which has been inspired by cuisines from around the world. Starters include roasted cauliflower soup with hazelnut gremolata, R50 and halloumi, fig and prosciutto spring rolls, R70, Asian lamb riblets, R60, and cider soaked mussels, R70. Also a small selection of jaffles. Salads range from a deconstructed Caesar, R90 to grilled chicken with caramelised beets, goat’s cheese and walnuts.
Surprisingly only two burgers – hopefully this means the era of gourmet burgers is finally over – and baguettes filled with Asian chicken breast, pickled radish, carrots and chilli, as well as a vegetarian option with portobello mushrooms.
Mains vary from steak with giant Yorkshire pudding to summer pasta (with olive oil, basil, chilli, garlic and lemon zest), a coconut cashew chicken curry and brown butter lime salmon with wasabi mash.
Signature dishes include T-bone, pie of the day, pork ribs and lobster mac ‘n cheese for R145 which sounded interesting with its gruyere sauce with herb crust.
I had two starters, the above-mentioned chicken wings and an Asian prawn salad with mango, crusted prawns, and a peanut chilli dressing, R80. The prawns were perfect, firm and plump and the peanut chilli dressing sublime. Since we used all the peanut sauce (served in a  shot glass)  for the prawns, the salad greens ended up being a little bland. So much more peanut sauce is needed here, I think.
The daughter, no so hungry, opted for a Durban chicken curry jaffle, R60, which was particularly good. All the flavour of a good curry without the oil. What a win.
Friend Steve ordered the rocks burger, R90, handmade 100% beef patty served on a brioche bun with mature cheddar, bacon and jalapeño chilli jam. He rated it as one of his best. The patty was unusually thick so eating with your hands is impossible unless you have a VERY large mouth.
The son-in-law had his heart set on the pie of the day after seeing it served to a neighbouring diner, only to discover it was the last portion. He settled instead on smothered chicken breasts, R105, which is sundried tomato basil and parmesan cream sauce accompanied by pan-fried gnocchi. It was very pleasant, with the chicken appropriately gender, without being memorable. But I suspect nothing would have satisfied after losing out on the pie.
We shared two dishes of Eaton mess with raspberries and toasted pistachio nuts, R50. I enjoyed it as it wasn’t too sweet.
The only disappointment was the hot fudge sundae, R40, topped with crushed Maltesers, which the daughter insisted used cheap ice-cream. Perhaps she should have opted for the spiked milkshakes. Like the s’mores with marshmallows, ice-cream, chocolate sauce and vodka, R40, or the nutty nola with Frangelico. Next time perhaps. 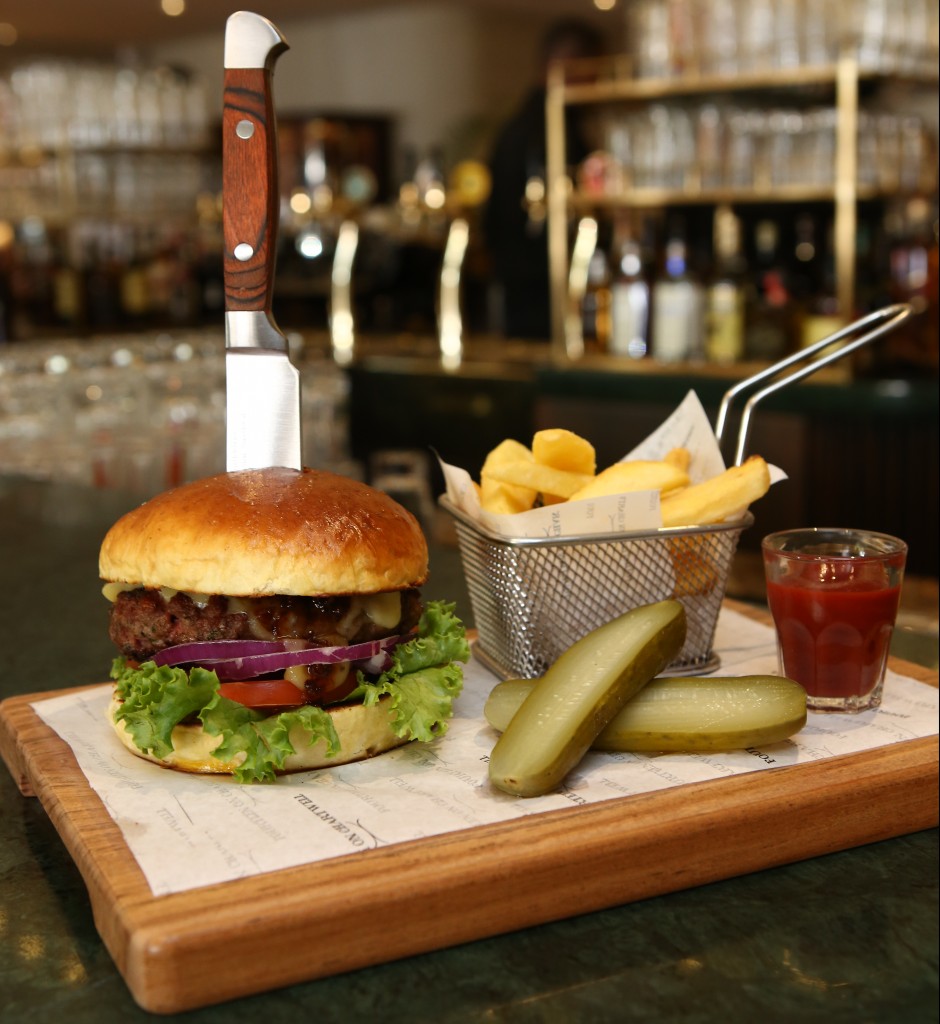