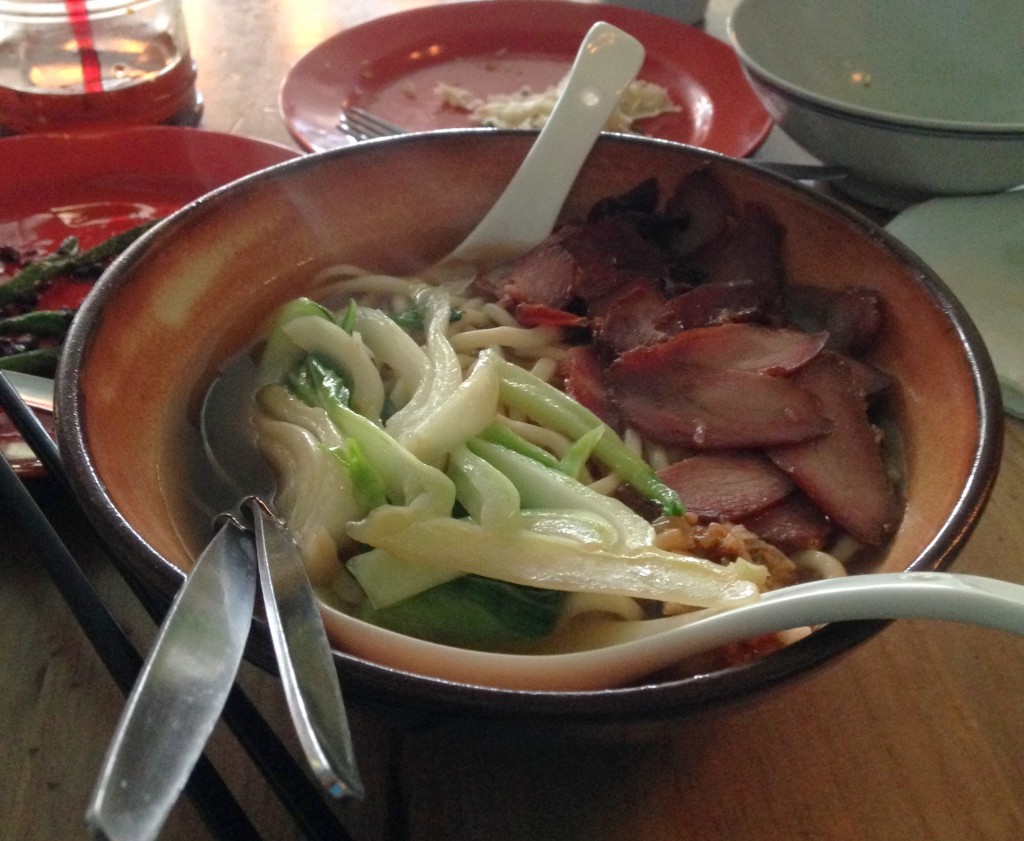 “I don’t want to know what it’s ‘bean’,” my father-in-law says. “I want to know what it is now.” Well I know what it is now. It’s a dish of dry-fried green beans in black bean sauce. Crunchy like whole fried prawns, coated in salty paste, we open our mouths to them like congregants of a snake-feeding preacher.
We’re at PRON in Linden, PRON being an acronym for People’s Republic of Noodles.
The Johannesburg suburb of Linden has been happening for a while now with the opening of restaurants like The Whippet and The Fat Zebra, which has the best and most ironic boerewors roll in town, made of 100% rump. And unlike nearby Greenside, which is still recovering from years of illegal clubs, tanked up undergraduates and glad-handing car guards, Linden has become hip rather than heavy.
As for PRON it is no Red Chamber which is owner and chef Emma Chen’s other Joburg restaurant. This works in its favour. The Hyde Park setting of Red Chamber always make me feel a little unwashed. Secondly, PRON’s menu is short and simple with just two categories of food, tapas and noodles, and prices ranging from R30 to R70.
Besides the beans the other dish we order off the tapas menu is a scabrous-looking, spring onion-studded freshly made ‘hand-break bread’. But don’t judge a crumb by its crust. Probably intended to scoop up sauces in the other dishes, it’s so delicious that we finish it off in seconds.
From the noodle menu we select the pork. The handmade udon noodles are as juicy as baby silkworms and the slivers of pork no thicker than communion wafers. The taste is pork carpaccio heaven. My wife and I disagree, however, on the temperature of its broth.
“A bit tepid, don’t you think?” I say.
But Judith duly points out that I like everything scorching hot, including my cappuccino, which is apparently an unforgivable sin.
The final dish arrives a little after the fact, Szechuan chilli chicken, and it is the only slight disappointment. Tender pieces of chicken simmer in a shallow bowl of bean sprouts, finished off by someone with a heavy hand at the chilli tiller. The result is hot yet surprisingly bland but Judith is able to save the day by spooning over some of the leftover black bean paste, which gives the chicken the salty inflection it lacks.
And that was our Linden lunch. We’ll definitely be back for some of the other dishes. Noodle dishes make me happy and I was even happier when I opened my fortune cookie on the way out. It said: “You will never go hungry.”  – Andrew Brouard, July 2015