Superfood cocktails at Tanya’s Cafe at the MyHotel, Chelsea, London

Last year it was all about kale, chia seeds, kimchi and cauliflower mash as substitute for potato (thanks to the Banting diet which just won’t go away). Now  Shrewdfood can reveal some new food trends, which might or might not come our way. Like turmeric as a health food, crazy coffees, camel’s milk and healthy cocktails.

Planking
Eh, we are not sure about this one. Planking is about cooking meat, poultry, game or fish in the oven on a plank of wood. This way, apparently, the natural flavours of the wood will come through. Cedar is one of the woods mentioned, but be careful of what wood you choose as you don’t want to poison the family.

Cauliflower is the new kale
That kale was hugely popular in countries like Britain last year might have passed you by. In fact it became the most popular vegetable in Britain last year. But now  kale is so last year and in its place comes cauliflower. You can roast it whole or steam it or turn it into cauli rice, or cauli cous cous. In Britain they are even making pizzas with a cauliflower base. Frankly this sounds vile. Ever tasted cauliflower mash? It was vile.

Camel’s Milk
The latest must-have tipple for the health-conscious British drinker is a bottle of chilled camel’s milk. Priced at £19 for half a litre – the same price as supermarket Champagne. Camel’s milk is thought to be much easier to digest than cows’ milk
The exotic beverage has gone on sale online in the UK for the very first time and MuscleFood.com has already seen huge sales..
The taste is similar to cow’s milk but slightly saltier. But the health benefits of drinking camel’s milk over cow’s milk are huge; it’s packed with the essential vitamins and minerals we all need for a healthy diet and it’s a rich source of protein. It’s also 50% lower in fat and 50% lower in saturated fat than cow’s milk and is a natural probiotic. Still, can’t see this coming our way anytime soon.

Crazy Coffees
This year sees the rise of fizzy espressos (30ml espresso and 30 ml sparkling water), bulletproof brews (a blend of coffee, butter and oil) and java served with a lemon slice. This is enough to make any self-respecting barista turn to tea-making.
Nitro Coffee: Just when you thought you’d figured out iced coffee, this latest take (pioneered in part by the obsessives at Stumptown) has hit US coffee counters. Pulled from a tap, nitro is cold brew infused with nitrogen to create a smoother, creamier drink. (Think Guinness with a different kind of buzz.) But be careful, they are caffeine bombs. – (info sourced from www.bonappetit.com)

Tumeric
Here in Durban turmeric is a well-known and well-loved spice but still largely relegated to flavouring curries. But in America and Britain it has become the new super spice. Now they are throwing turmeric into all kinds of food items, from juices and ginger tea to soups. Why? Because turmeric has powerful anti-inflammatory and detoxifying qualities, as well being able to help fight off bacterial and viral infections and lower cholesterol. But its most exciting nutrient is curcumin which medical researchers s are looking into because of it potential to fight cancer and Alzheimer’s disease. Turmeric also has high levels of iron and manganese.
From www.wellnessmama.com comes this recipe for turmeric tea, which is said to be incredibly soothing and great during illness or as an everyday immune booster.

Method
1 If you have a good blender, just dump hot water, shredded coconut, Turmeric, Cinnamon, honey/maple syrup and cayenne into the blender and blend for 2 minutes.
2 If not, heat the coconut milk on the stove until hot but not boiling then add the other ingredients and stir well. You can also heat the coconut milk and then add all ingredients to a blender for a smoother version.

It’s a Bug’s Life
Eating protein-rich insects is becoming increasingly popular in western countries. But Entomophagy – the practice of eating insects – has been a common practice in non-western countries for centuries. Termites are already eaten in many African nations; Yellow jacket wasp larvae are popular in Japan, cicadas are eaten in Malawi, and weaver ants in Thailand. And her in South Africa there is a long tradition of eating mopane worms
And Britain will soon get it’s own bug restaurant when chef Adam Holcroft opens Grub Kitchen in Haverfordwest, Pembrokeshire, Wales. Adam will be serving the likes of worm fudge ice cream and bug burgers and Satay Sago Worm Pad Thai: a stir-fry dish with baby sweetcorn, capsicum, courgettes and crickets

Brinner
Bruch is so last year. This year the word is brinner, breakfast for dinner. The trend for pancakes at dinnertime, eggs and bacon for lunch and cereal before bed has been sweeping in the US.  Britain now has restaurants devoted to serving breakfast cereal (only) where you can choose from more than 100 types of cereal, 20 or so toppings and 12 varieties of milk from 8am to 8pm. Hmm. Who likes cereal that much?

Eating Wild
Steaks and chicken breasts are so conventional when you can eat crocodile steaks, or ostrich, kangaroo, wild boar and venison. In the UK it’s even possible to buy imported llama mince.  Not that much of this is new to us South Africans who have been eating wild for a long, long time. Still it’s nice to know the rest of the world is catching up with us.

Superfood cocktails
Cocktails which offer health benefits is now the way to go and now could include the likes of celery, kale, wheatgrass, beetroot and fennel. This means that the new cocktails are full of antioxidants, vitamins and minerals.
Tanya Maher, owner of Europe’s first ever superfood cocktail bar in MyHotel in Chelsea, serves cocktails which include a combination of vodka, lemon, beets, carrot, sweet potato, raw honey, ginger, lavender bitter and chia seeds; or walnut infused vodka, fresh cherries, cacao powder (packed with antioxidants and magnesium), acai berry (used by athletes for stamina), vanilla bitter and maple syrup.
Guilt-free drinking? 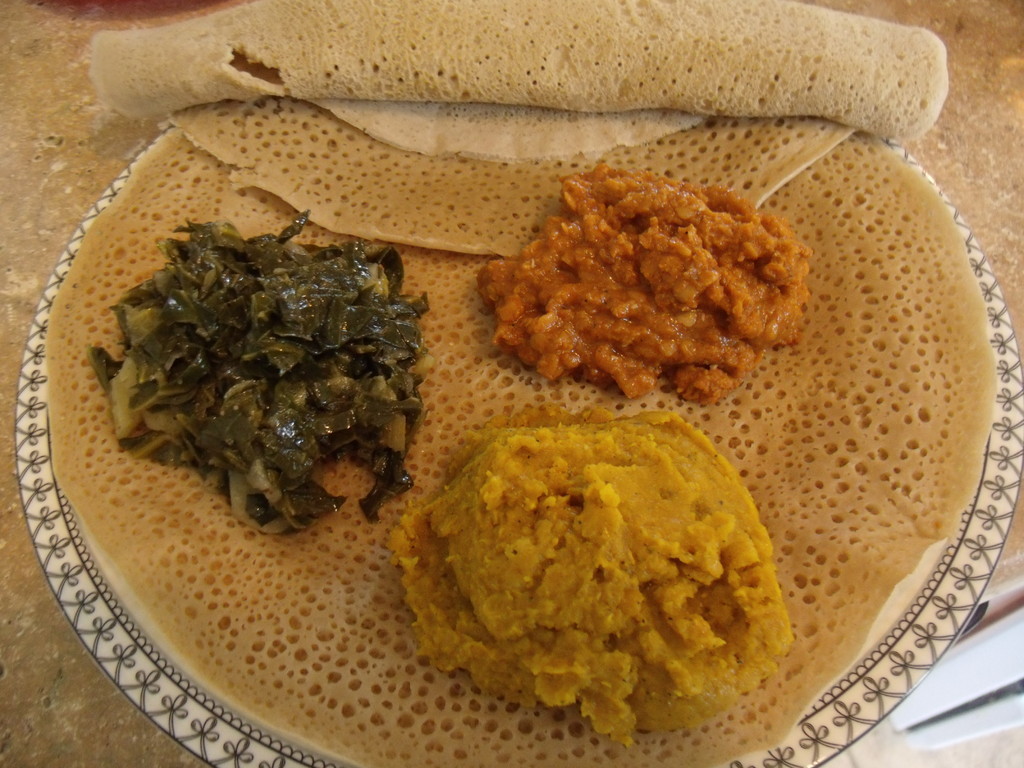 Njera, a flatbread staple in Ethiopia is made with teff, the world’s smallest grain

New Grains
While quinoa is still popular (it’s incredibly high in protein), now new grains have become available thanks to the obsession with gluten-free food. The new grains include freekeh – a smoked green wheat from the Middle East, which can be added to salad and soups to provide texture – and Ethiopian teff, the smallest grain in the world, which is  full of calcium, protein, iron and vitamin C. It’s traditionally found in njera, a flatbread staple in Ethiopia.