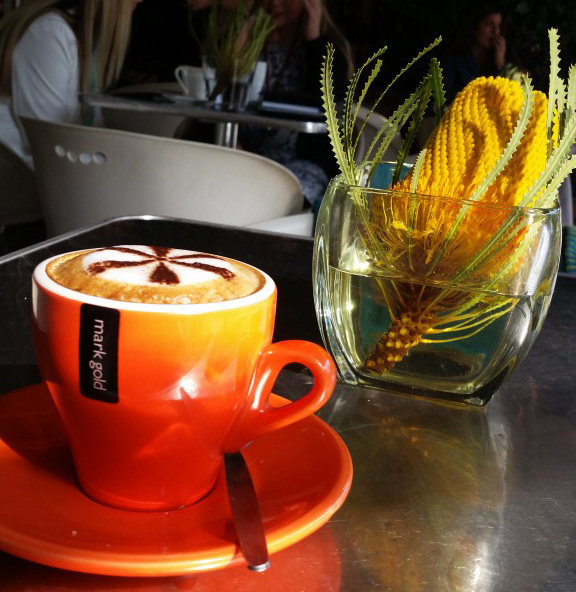 In the pursuit of the new, trendy and shinier we often forget the coffee shops that were once the new kids on the block and that set the pace for style and the bar for standards. And, most importantly, stood the test of time
One is Mark Gold, something of a vanity project for brothers Dean and Mark Gold who operate one of Durban’s most exclusive jewellery stores.
Mark Gold the cafe is as stylish as the jewellery store. Located on the terrace area in front of the jewellery store it’s surrounded by lush greenery and overlooks Durban’s most beautiful green lung, Mitchell Park.
Everything about Mark Gold  screams style and attention to detail, from the chairs and flowers on the tables to the food and, of course, the coffee.
Their coffee has won them a consistent  place in Cafe Society’s ton top. It  has also made it into the top three several times and has been overall winner more than once.  This annual competition run by the Sunday Tribune is not only a guide to coffee and cappuccino drinking but a competition to find the best coffee drinking spots in the Greater Durban area.
Because I established the competition and ran it until last year I am guilty of being one of those looking for the new, the trendy and the shinier.
Now newly retired and having more time, I recently revisited Mark Gold after a long absence. Twice in a matter of weeks.
Sitting in the warm sun that flooded the terrace I felt as if I had come home. I admired the  single and exquisite  protea that graced the table as I sipped my cappuccino. It was beautifully presented in a burnt orange cup – so bored with white cups, aren’t you? – and served with a tiny biscuit.
Topped by a dense foam, its dark crema hinted at its strength. This was a bit worrying at first as I don’t like bitter coffee. True, it was a little strong for me on the first sip but it mellowed with each sip that followed. I drank every last drop of the rich brew.
Mark Gold the cafe also has a small menu of salad, sandwich and breakfast options. A winner for me was their garden salad with avocado and artichokes.  So if you haven’t been to Mark Gold for a while, pursuing the new and trendy and so on, try it. Ambiance is warm and service welcoming and friendly
– Ingrid Shevlin