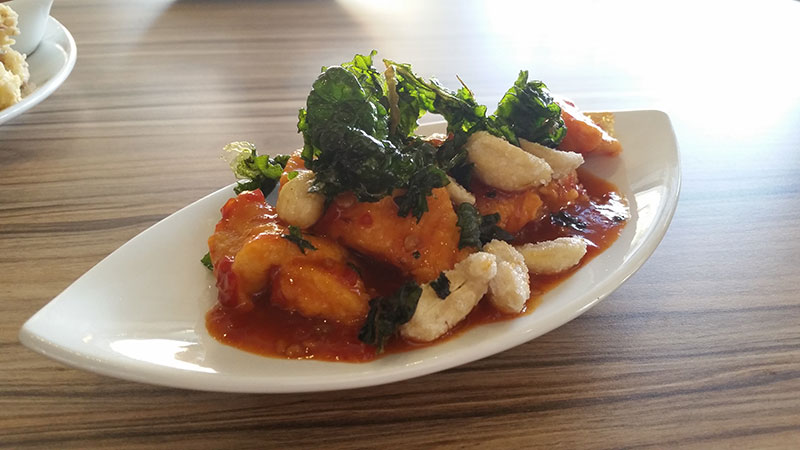 INTRO
If this review of Greedy Buddha reads like I’m damning it with faint praise, I am. In a way.
It’s simply that the new Greedy Buddha at Gateway is not as good as its first incarnation in Durban North. But if you hadn’t experienced the food there, you would probably disagree with this review.
The Durban North version was a hole in the wall kind of place where dining was confined to a windswept terrace. When it rained it was bleak.
But the food, Asian fusion, was sublime.
Presiding over its kitchen then was Nadia Adams, an alchemist when it comes to balancing and combining complex flavours. The meals she prepared rank among my favourite of all time.
Then Nadia left to pursue her own culinary path and in April the Greedy Buddha moved to its present premises in Palm Boulevard at Gateway and now has a new team of chefs.
On the menu they boast that Greedy Buddha is bigger and better.
Bigger yes in space, and better in their choice of venue and in decor but not better food-wise. But more about that later.

DECOR
I like its contemporary design with its cleans lines and neutral shades of slate grey, white and brown. Terrace doors at the entrance look over a quiet courtyard while large windows at the back (front?) overlook Palm Boulevard. The feel is spacious, light and airy. Very zen in fact.

TO THE FOOD
As for the menu it’s not only bigger but more sensible. Whereas the Durban North menu focused on serving only tapas options, making it expensive for those with hearty appetites, the Umhlanga menu has more substantial main items as well as tapas selections.
And they have so many different options that it’s difficult to choose. For instance you could stick to tapas or have only a main meal. Or you can order a tapas tasting menu for R199 or take advantage of lunch specials. For example, any three classic tapas and rice or noodles for R89. There are also specials offering different combinations.
The menu is divided into categories such as soups, dim sums, vegetarian classic tapas, signature tapas for meat eaters, seafood tapas, salads, ramen noodle soups, gourmet noodles and signature mains. The last category (there are also daily specials), includes the likes of crispy pork belly, a beef fillet and a line fish of the day.
The specials on the menu, as was described by the head waiter, sounded so mouthwatering it was difficult to make a choice.
Sadly, the food did not quite live up to this hype.
We, the daughter and son-in-law, ordered two main items and a selection of tapas.
The Szechwan halloumi chillI bites, R39, and the Szechwan chicken chilli bites, R45, which were both served with 5-spice crispy spinach and candied cashews, were pleasant but overwhelmed by the chill sauce.
The tempura baby calamari, R55, served with a chili sauce on the side, was unremarkable.
The butternut/feta/chilli and chicken/garlic/chilli won tons, R27 ad R31 respectively, were nice enough.
The “ducking fantastic platter”, R85, was a winner though. It was served with spring onions, cucumber and hoisin sauce and was very good. R85 was the cost of a medium platter and easily served two. The large platter costs R169.
Nice but not as good was a spicy baby chicken served in bite-sized pieces which was “sold” to us as having a strong lime presence. It didn’t. Still it was tender and tasty enough. It was served with a smokey potato puree, which was interesting. Cost was R119.
With our meal we ordered a serving of fried rice which was so mushy we returned it. Second version was much better.
Our favourite item, however was the dessert, a special, a citrus and coconut parfait. It was small squares of wobbly coconut ice-cream accompanied by citrus slices and jelly worms and set on top of crushed chocolate biscuits, R35 (see photograph above). This was sublime.

VIBE AND SERVICE
The vibe at Greedy Buddha is warm and friendly and the service superb and very knowledgeable. They handled our dissatisfaction with the fried rice with great professionalism.

SUMMING UP
Would we return? Yes we would as there are enough options to go another route. There are several pork dishes on the menu – which we don’t eat – which have had rave reviews on Facebook and elsewhere. This meant that these options were not open to us.
The smokey flavouring of the potato puree served with the spicy chicken was reflected in the complementary tapas served at the start of our meal. It was an aubergine dim sum served with a smokey mushroom puree, which uneasily straddled the border between sublime and unpleasant, as it was a very dominant flavour. I don’t recall tasting this flavor in Asian food before (although Google revealed you can find it in Chinese food), but I like the fact that the chefs are introducing different tastes.
If we hadn’t experienced Nadia Adams’s food we would probably have been less disappointed.
So, yes, I am damning it with faint praise. But you might feel differently.
Our bill came to R564

LOO REVIEW
Because the restaurant is new the toilets, unisex are very contemporary, pristine and stylish. Each cubicle is totally enclosed offering all the privacy you need – reassuring when the loos are unisex.